One of the great things about how exercise is evolving these days is a desire of people to get stronger doing exercises that mimic real-world movement. More to the point, there is a pull away from isolation exercises and toward compound movements.

I’ll admit that I do plenty of isolation exercises, mostly on things like arms and shoulders. But the reason for that is to provide symmetrical balance. I don’t want one side of my body overpowering the other; that just leads to injuries.

But there are other areas where I do my best to use compound exercises almost entirely.

My desire to be a stronger hiker and runner has led me in this direction when working out my legs, and similarly when trying to build up those upper body climbing muscles, it’s nothing but compound movements.

I want to focus on legs in this post. Legs are the most neglected body parts in the gym, mostly because people see results faster when working their upper bodies, and let’s face it – working the legs is really hard work if you do it right. This is particularly true when those leg movements are based on compound movements.

One other thing I try to do is design a workout that does not last longer than an hour, preferably within 45 minutes. A workout that long, plus cardio, makes for a lot of work and time spent in a day. Go any longer than that and the possibility of overkill rises dramatically.

What I’ve been doing lately has been refined from what I’d been doing for a couple of years. Gone are the isolating exercises on machines. They’ve been replaced by compound movements that mimic what I might see in the everyday world or out on the trail.

Here’s how it looks:

SQUATS: Three sets of eight reps, with the weight going up each set. I don’t squat heavy, mostly because I really want to emphasize slow reps, a deep midpoint and a finish that focuses on driving with the lower body and stabilization from the core. So it might be a set of eight with 135 pounds, then eight reps of 190, and eight more at 235. I drop down with my thighs below parallel, then drive up, back straight. I do not lock out my knees at the finish of the lift. Squats are legendary in their ability to work the entire body and build up every part of your legs, particularly the thighs and glutes. Provided your knees and back can cope (for most of us, that is the case), squats should be in your arsenal of leg exercises. You can also do bodyweight squats, squats with dumbbells or squats with kettlebells. 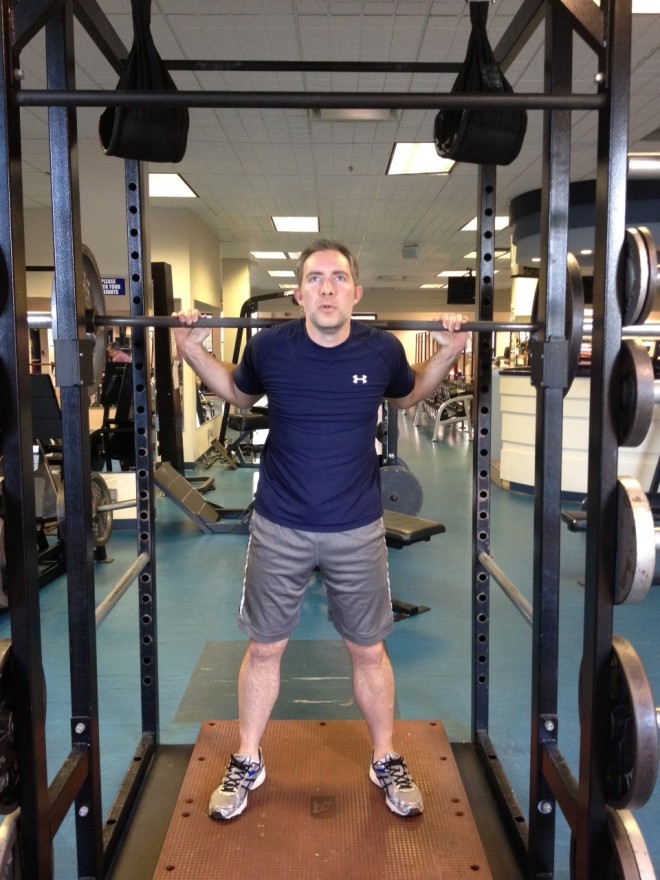 Starting position on the barbell squat.

Midpoint position on the barbell squat. Try to break parallel on the bottom of the exercise. As you raise up, drive through your heels and push with your thighs/glutes, engaging the hips. Do not lift with your back.

LUNGES: Like squats, this is another “super exercise” that really works your whole body. It’s technically a hamstring and glute exercise, but the stabilization of the core and work on the quadriceps are also factored in. I do three sets of eight, with dumbbells. I increase weight with each set. As an example, I’ll start with 20s, then 25s, then 30s. Variations can include bodyweight lunges and walking lunges. Again, if you’re serious about working your legs, this must be in your routine. 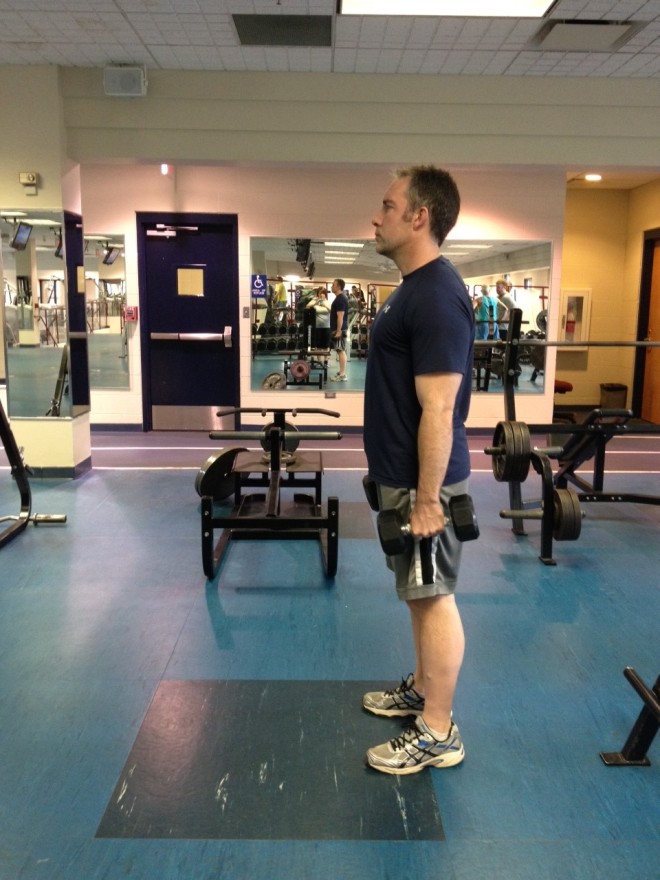 Starting position on the lunge.

Midpoint position on the lunge. Notice the knee is not going too far ahead of the ankle, back is straight.

WEIGHTED STEP-UPS: I think this is an amazing exercise that is overlooked by many. It’s very simple: Step up on a higher object, use one leg to lift you up, then step back down, alternating legs. I add a slight twist: At the top of the lift, I do not place my trailing leg on the bench, instead holding the top position on one leg, then stepping down. This keeps tension on that leg, which is exactly what I want to do. Again, I’ll do three sets of eight, adding weight as I go. I go light: 10s, 15s, then 20s. They key is form, trying to work the legs and glutes and not using momentum to lift me up. Body weight step-ups are also good: After all, you are lifting your entire body up! I like this one because is mimics going up stairs or hiking steep paths, thus simulating elevation gain – a much different motion than level-plane walking. Like squats and lunges, this works your quads, hams, glutes and core.

Stepping up to the bench.

Midpoint position on the step-up. Notice the other leg is not stepping on the bench, keeping all the tension and work on the lifting leg.

ROMANIAN DEADLIFTS: Again, a seldom-used but killer exercise. This focuses on the hamstrings, using tension on both the lowering and raising portions of the lift. You can use dumbbells or a barbell. Strong people will pile on large amounts of weight, but I’d encourage you to start light and get the form down. You start standing, knees are not locked out. You then bend down at the hips, back straight, concentrating on a slow, controlled lowering. Be careful not to round your back: Keep it straight. When the weight is nearly touching the ground, pull back up, concentrating on keeping your back straight and tensing your hamstrings. There will be a slight bend at the knees – not locked out straight, but not bending down, either. I’ve done heavy and light, but I find that going lighter allows me to go slower (which is better) with less stress on my back. Remember, this is a leg exercise, not a lower back exercise. So I’ll use dumbbells, starting with 40s, then going up to 45s and 50s for sets of eight.

Starting and ending position on the Romanian deadlift. 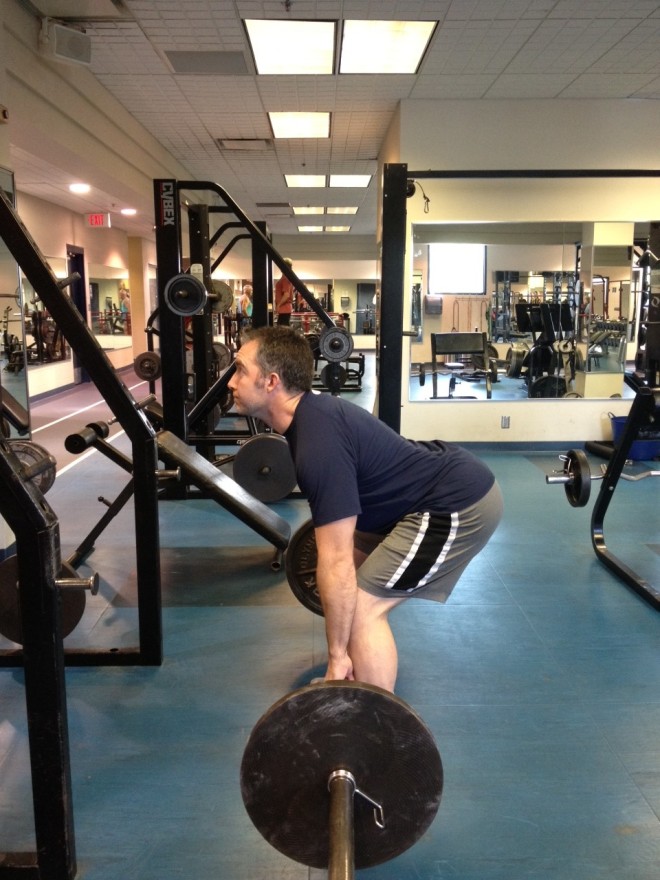 Midpoint of the Romanian deadlift. Back is straight, action going down and back up is using the hips as a hinge, with a slight bend at the knees. You should feel tension on your hamstrings and glutes, as these are your target muscles.

CALF RAISES: In this workout, the calf raise is the only isolation exercise I’ll do. But in this case, I think that’s OK. You can do this standing or seated on a leg press; use body weight, dumbbells or a barbell; and single or double leg. My calves are pretty strong, so I do three sets of ascending weight on a leg press, using 265, 310 and 360 pounds for sets of 12. I go slow, not letting the tension in my calves allow me to “bounce” the weight back up (I see people do this a lot, and it’s counterproductive). There are so many variations on this family of exercises that I may have to write an entire post on it. However, much of the other training I do – mid-foot strike running in particular – blasts my calves several times a week. If that is your experience, keep that in mind – your weightroom work on calves should supplement that already heavy load you put on your calves. Don’t overdo it. 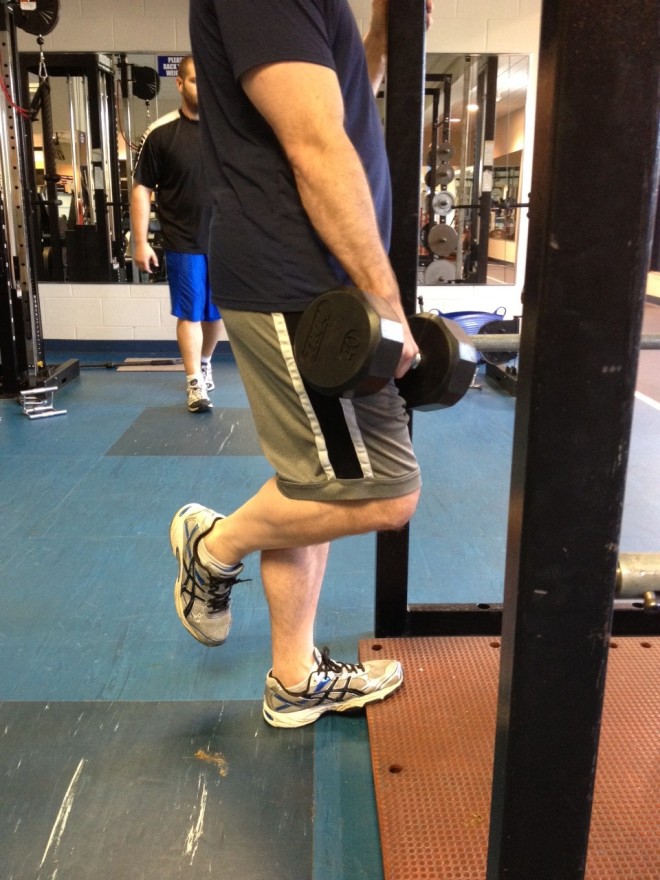 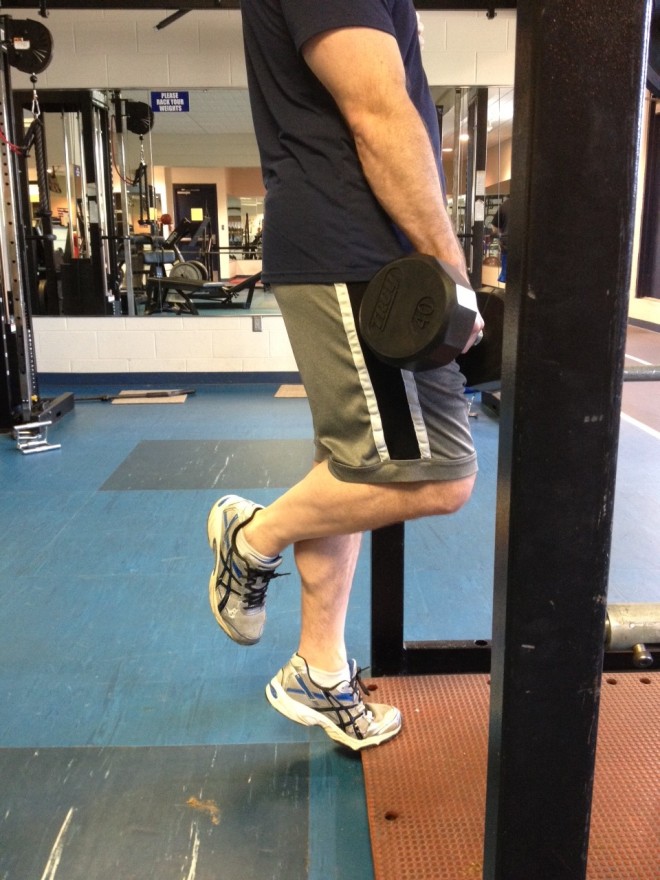 Midpoint of the one-leg standing calf raise. Be sure to drive through your big toe, which helps prevent your ankle from rolling out. Ankle roll-out will stop you from working the whole calf. 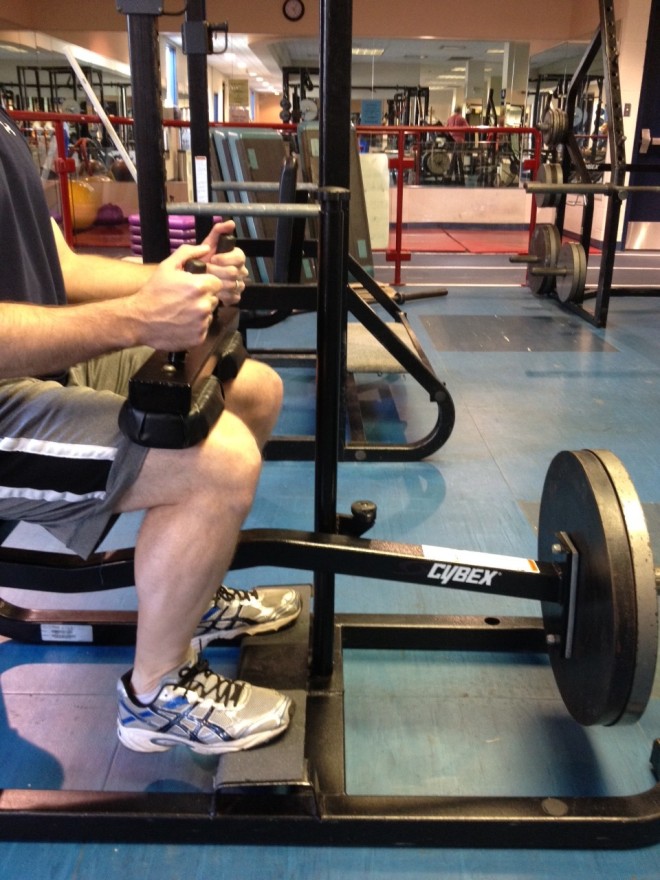 So that’s the routine. It won’t work for a bodybuilder or figure competitor, but as a support system-style workout for runners, hikers and backpackers, this should help build a strong, athletic and healthy foundation.

3 thoughts on “Fitness: A compound movement workout for legs”