Midwest and southern states get a bad rap for being places where folks do a lot of sitting around. In many cases, that’s justifiable. But not so much this weekend.

First off, it was an awesome weekend, weather-wise.

My hometown baseball team, the Tulsa Drillers, was in town and played before a packed house. Great weather, good crowd, and a win, with some pretty sweet views of downtown.

The three-day Tulsa Tough cycling race was also in town. This is always  a party, and these folks could flat-out cruise.

Not everything was so great, however. It started good enough on the trails. It’s always good when they look like this: 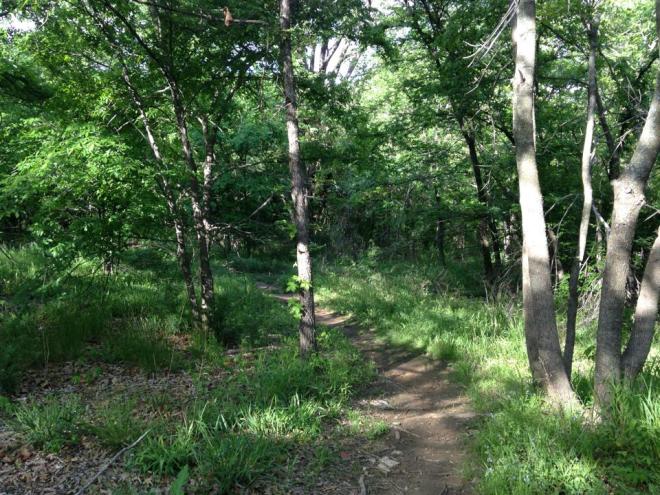 Unfortunately, some of the teens and college-age folks don’t have trail etiquette down quite yet. Two folks decided to plop down in the middle of the trail and have a chat. Keep in mind, we’re talking single-track trail with not a lot of room to move around. They barely started move a little bit out of the way, which forced me to run off the trail into a grassy area. That grassy area concealed a nice-sized hole, which ended up with me spraining my ankle. No cool.

Thankfully, it looks a lot angrier than it feels. I can walk and climb stairs just fine and it doesn’t hurt too bad, though my short-term prognosis on running is a little in doubt. People need to be mindful of trail manners. Trails are not made for sitting, They’re made for traveling, either hiking, running of biking.

I was also a little bummed to find some trash dumping on the edge of the wilderness area, but that’s nothing new. Just disappointing.

But on the plus side, a lot of people were out using the trails there and elsewhere in the city. Tulsa may never rank among the nation’s most active or fittest cities, but with more things available to get people outside doing cool things and more weekends like this, well, maybe T-town is on the upswing.

4 thoughts on “One very active weekend in Tulsa”