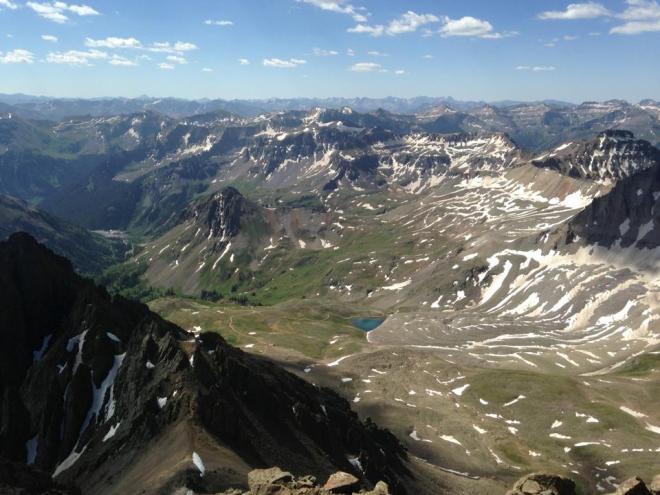 Tucked away in the folds of the western reaches of the San Juan Mountain Range, Yankee Boy Basin spreads out before you as a peaceful high country plain guarded by some of the fiercest ramparts in all the Rockies.

In late spring and early summer, there is just enough snow on the peaks to offer a bright contrast to the rugged browns and grays of the cliffs above. That same snow feeds the basin with life-giving water, which has helped the meadows below sprout with green grasses and bright flowers. We’re still too high to see much of the forests below, but this place above timberline is very much alive.

As beautiful as the meadows are, the surrounding mountains that are the stars of the show. The monarch of this realm is Mount Sneffels, a huge peak with a massive gash down its center. Its flanks are jagged ridges, adorned with stone towers that make them appear as the spine of a huge, ageless dragon.

But most striking is the Dallas Divide. This high, sheer wall of rock is anchored by Gilpin Peak on one end and Dallas Peak on the other. Between them, a steep, high ridge clothed in rock and snow, so imposing that just getting to the town on the other side – Telluride – forces you into a lengthy drive around the range, not over.

But unlike manmade fortresses that inevitably fall, this stronghold – carved over time by ancient geological and glacial forces – remains strong. Eons go by, and all is still peaceful in this little alpine realm.