Last week I had one of those “running is life” moments. All because I wanted to go fast.

I make it to the trails at least a couple times a week, and that day’s run called for a four-mile loop on some of my favorite stretches of local singletrack.

One trail in particular, called “Ho Chi,” is a ton of fun, especially if you go north. The general aspect of the trail is downhill after you do a brief climb to where it starts. 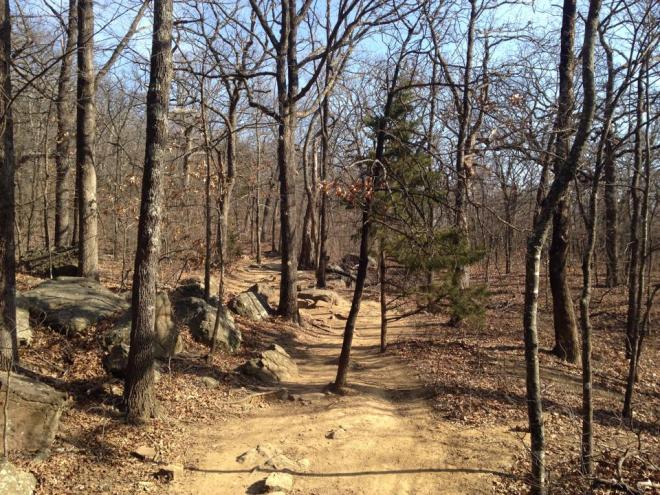 The start of the fast track. Bombs away!

I’m not sure what got into me that day, but I just had a need for speed. So I bombed down that trail, jumping over boulders and stumps, opening up my stride and just generally tearing it up. There is a great sense of empowerment when you tackle a stretch of trail and beat it into submission.

So for a couple of miles, that’s what I did. Seldom are the times I’ve run that fast. Maybe a few short races. Oh yeah, I was feeling it. I’m not exactly sure why, but I just felt the need to run with aggression. I picked my lines, leaped over obstacles, churned my way uphill and bombed the downhills. It wasn’t quite reckless abandon, but somewhere close to it. “Attacking” the trail might be a good description.

Heading back south, it would be mostly uphill to the summit of Turkey Mountain before a steep quarter-mile downhill section back to the trailhead.

As you might have already predicted, I gassed myself out. All that spunk that powered me through the first couple of miles was gone, eaten up by the hubris and ambition that possessed me during the first stretch. There was no way I could keep up that pace now, and trust me, I didn’t.

In doing so, however, interesting things happened. In the quiet of my now subdued pace, I heard rustling in the leaves. Below me and off trail, an armadillo was rooting around for grubs.

Further down, I noticed an unusual and weirdly awesome shaped tree.

And in the stillness of the moment, I just stopped and listened. The place where I run trails is in the middle of a city, but is large enough that most of the city noises are absent. What I heard was, well, almost nothing. Just the quiet of the woods. That’s a rare thing for most of us. We’re surrounded by the buzzes and clangs of man-made things, the beeps and boops of electronic devices and the din of conversation. If you’re honest with yourself, you probably turn on the TV or a radio at home for no other reason than to have some background noise because the sound of silence so uncomfortable.

I contemplated the contrasts between the first half of this little jaunt to the second, wondering if I gained anything training-wise from going full-boar, only to be slowed to a shuffle by fatigue. The answer was “yes,” but it also sparked another thought.

As corny as it sounds, my workout that day was a tidy little metaphor of my adult life. Trust me on this one, it’s true. Let me explain…

Upon graduating college, I did what a lot of young people do. I got a job. Started a career. Got hitched. I had big dreams, and I worked my butt off at small operations trying to do big things so maybe one day one of those big-boy outfits would notice me. That meant lots of long hours, long weeks and sacrifice for low pay. Eventually I did get noticed by the big boys. I landed a job at a large newspaper, made a name for myself and moved up the food chain.

But as it so happened, the media business is a tough one. And life, not coincidentally, can be pretty rough as well.

A few years back, my personal life took a bad turn. At the same time, a new assignment at work took me from a plum job to crap patrol overnight. And then my oldest brother got sick. Really sick.

I’d like to say that was rock bottom, but it wasn’t. My brother just got sicker, and within a few months I got laid off with about 40-something other unlucky co-workers.

Two months after that, my brother died.

I had worked for years to build a career, build a life, become something successful, but at that moment all I had to show for it was grief, regret and a severance check.

I’d bombed down the path of life, and life – a combination of my own actions and the things that happened outside of my control – found a way to slow me down. Way down. Many things that were so important to me were stripped away. Relationships strained or broken. Oh, and I was broke and jobless. You could say that I was spent, exhausted from the crash that came from a pace so furious, so oblivious, that only the most blind person wouldn’t have seen it coming.

And that’s where the path took another turn. Forced to slow down, regroup and reassess, the world looked a little different, much in the way that the rays of the sun alter the appearance of a ridge, depending on what side of that ridge you’re on. A new job came up, and a new city. A slower pace. In the ashes of the old, new things sprung up, but it’s doubtful I’d have seen them had I not been forced to ease off the throttle.

I’ve been meandering for awhile now, and I really can’t tell you if this metaphor still has me wandering the woods or back at the trailhead looking for the next route to take. I could easily overthink it at this point.

The trouble with speed is, while exhilarating, it also smears the scenery into a rushing blur, void of details, warning signs and small blessings that might be trampled underfoot by the unwary or the unconcerned.

And speed comes with a price. I know that all too well from races where I’ve gone out too fast, and days like I mentioned earlier where I was fast, and unsustainably so.

So perhaps there is something to be said about choosing not to rush. We all beat a path to build a career, buy a house, start a family, cultivate a reputation and whatnot.

But if and when it’s all ripped away, can you be comfortable in the silence? Or will the silence of the wild open your eyes? This is something I’m still figuring out.

13 thoughts on “Going fast, slowing down and seeing running as a metaphor on life”