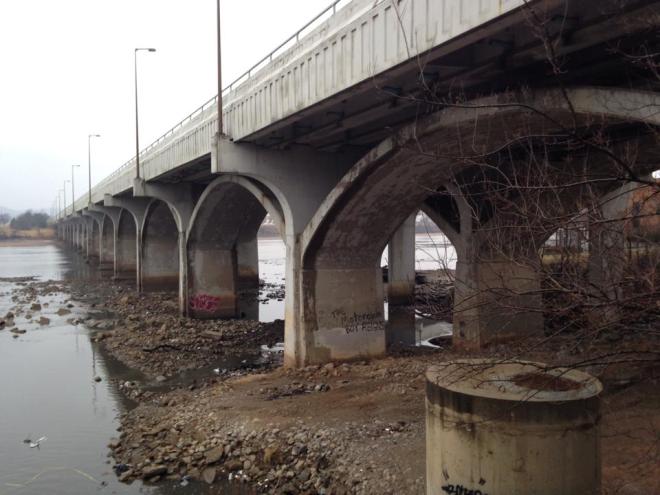 Under a bridge on a misty, cold-weather run. Beautifully dreary.

You can call this a Sunday confessional.

Generally speaking, there are two types of people. The first kind is the type who cannot sit still. They’re the ones who get bored easily. They want to do stuff. They want to be moving, acting, getting out there and shredding it until their body says, “No mas!”

The second kind of is the type who doesn’t mind chilling out. Grabbing some quality couch time. These are the kind of folks who can (and do) participate in Netflix binge-watching. Those AMC marathons? Yep, regular participants. They don’t mind getting out and doing things, but the Svengali-like power of the Lay-Z-Boy has much sway over this bunch.

Count me among the latter.

Say what? You may be thinking. But yes, it’s true.

I’d rather be among the former, just because it would make doing the things I enjoy – the hard things, mind you – that much easier. It would never be a debate if I was going to do another season of marathon training. It would be a done deal, barring injury, of course. Weather would never deter me. The temptation of watching “The Godfather” for the millionth time would be too weak to prevent me from doing more stuff outside.

Unfortunately, I’m not that guy.

There are a lot of great things about being able to chill. You don’t sweat the small things. You keep cool in stressful times. Restlessness is more easily controlled.

But inertia is a powerful thing, especially when your inertia is, well, static. It’s a lot easier to stay moving if you’re already moving. Getting going when you’re at full-stop is more physically taxing and mentally daunting.

That’s a problem we have here in the U.S. in general, where overeating and sitting still can be empirically measured. Every year, we’re reminded how much more obese the country is becoming. My home state of Oklahoma is a top-10 state in the nation when it comes to obesity rates; Colorado was recently ranked No. 2 in being the least obese (Montana is the leanest). And yet, with about 20 percent of its population considered obese, Colorado’s population is more obese now than Oklahoma was back in the 1990s. So that No. 2 ranking has a big Catch-22.

Clearly inactivity is not good, and it poses a particular challenge to people who gravitate toward sitting still.

Here is what that struggle looks like: Yesterday, the weather outside was crappy. The temperatures were in the mid-30s and it was rainy. I needed to get out and run. Keep in mind, I’m not a treadmill guy. I need to be outside, if for no other reason than to fight off the boredom that comes to mounting a machine and going nowhere.

And I was down with that. But there was still daylight left. It wasn’t that windy. And that rain? More like a fine mist.

“Get up,” outdoor curmudgeon said. “Get your run gear on, put on a ballcap and pound out a few miles. Make it five. You’ve run in worse. Much worse. Don’t be  wuss!”

These two battled it out for a couple hours as the afternoon wore on. The merits were weighed, and outdoor curmudgeon won out. No one else was out, but that was OK. The riverside trails were all mine. There was some beauty to the dreariness. Five miles later, I can say I didn’t regret a second of it.

If you’re the first type of person I mentioned earlier, God bless you. This dilemma rarely confronts you. If you’re within the second group, take heart. It might take a little more to knock you out of the couch-induced sloth, but you can do it. Consider each battle an exercise in growth, with each victory making it easier to transition from couch potato to human dynamo.

2 thoughts on “On fitness, motivation and beating the indoor curmudgeon”