Some of the scenery of Loveland Pass. Cupid is on the left, and many more amazing mountains are close by.

Something I’ve learned lately is you don’t have to trek to the middle of nowhere to have a good outdoor experience. I’ve learned that in my hometown of Tulsa, where I can go from a downtown apartment to a network of wild, wooded trails in 15 minutes.  Don’t get me wrong, my best outdoor memories have been made deep in the backcountry. But there is something to be said for more local escapes.

Last year, in an attempt to get ready for some time at altitude, I did some research on peaks near Denver that had quick access. It led me to Loveland Pass and Mount Sniktau. It’s an easy drive from the Mile High City, and a short hike that might not be the wildest or most radical outdoor experience I’ve ever had, and the route was pretty short. But it was big on scenery and training value (the trailhead is just short of 12,000 feet, and starts out steep). Sniktau made for a nice morning alpine hike.

As it turns out, there are a lot of peaks accessible from Loveland Pass. An ambitious and stout hiker could link up three 13ers and two 14ers in a day, should the weather cooperate. And even then, you’d still have plenty of summits left to bag.

Back in July, I was faced with similar needs to acclimatize and get some altitude quickly. The weather had been wonky all week, and finding paydirt was going to be tough unless I could find a place I could get to quickly and get out.  Loveland Pass proved to be just the ticket. Just past Idaho Springs, I could check out the conditions and not be forced to lose an entire day if Mother Nature rained me out.

My plan was to hike to Cupid, and if things looked good, continue on to Grizzly Peak D. The route had plenty of up-and-down, so despite the limited miles, you’ll get a workout.

Like I said before, I had fits with the weather all week – I’d been chased off Mount Morrison, had to scuttle plans for the Kite Lake peaks, and wondered if Longs Peak later in the week would pan out (it didn’t). My morning at Loveland Pass would be no different. 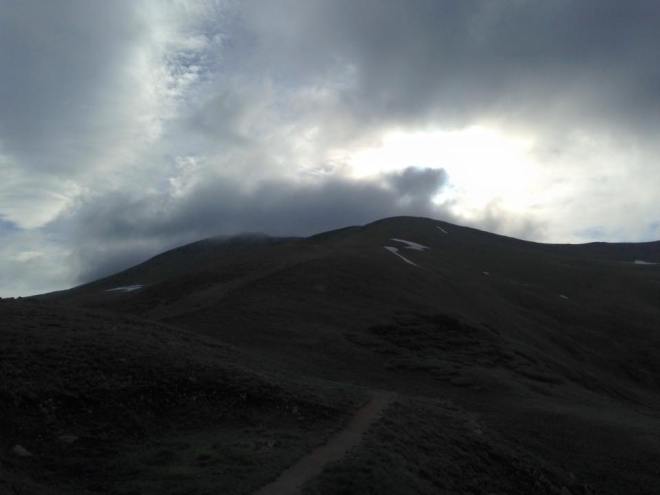 One might think this view says “go home.” Start of the trail toward Sniktau and Cupid.

Rains hit the Front Range and Denver much of the morning, and clouds swirled around the mountains when it was dry. It would be touch-and-go.

As previously mentioned, the route starts steep. You walk up a staircase, plod along a wide trail for a couple hundred feet, then start the steep ascent toward the top of hump that is just short of 13,000 feet. The gain is almost 1,000 feet in less than a mile. 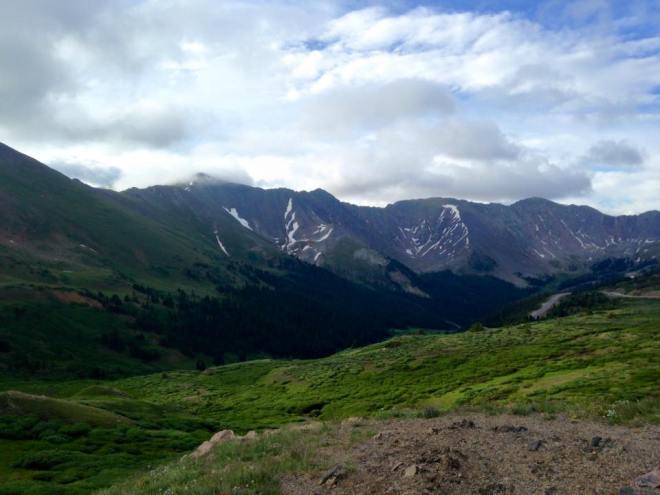 There’s a ski resort over there somewhere. And a lot of other cool stuff.

For Cupid, however, you can take a bypass. A fork in the trail gives you the option of continuing up, or by turning right, you can follow below a ridgeline connecting the main route to Cupid. I took the latter.

I crossed a couple of snowfields on mellow hiking, then climbed up to the ridge. From there, it was a steady uphill pitch straight to Cupid’s summit at 13,117 feet. Simple enough, right? 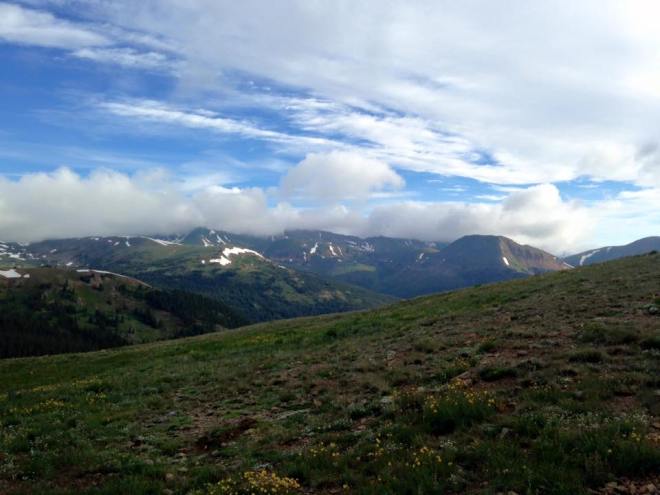 More moody weather, but it looked like it was getting ready to clear up. 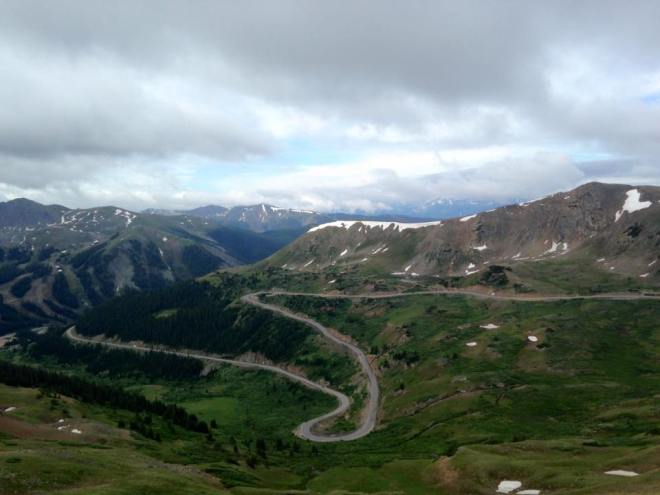 Looking toward U.S. 6 as it goes through the pass. Clouding up again.

But what made an impression on me were a couple other things.

First, I saw a dude running the trails. He passed me a couple of times, first early on the route, churning up the hill while I was trudging upward. Then later, going the other way off the top of Cupid, he was headed down. We chatted a bit on that second meeting before he took off again, apparently pressed to meet his wife at the trailhead. He was dressed like he was running a 5K, despite cool temps (in the 40s) and plenty of wind. I guess the body heat from, oh, RUNNING at 13,000 feet made his wardrobe choice OK. Inspired by his pluck, I’d later attempt to run some of the mellower pitches as well, but got light-headed. I reverted to hiking in short order. That’s what being a flatlander gets ya. 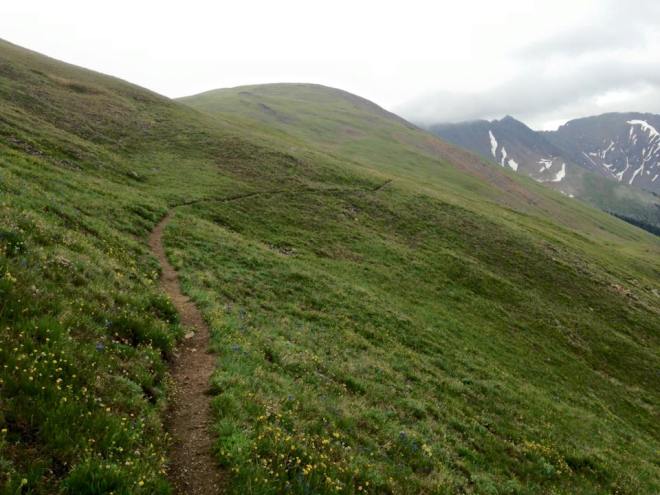 The good trail at the half-mile junction. Cupid is straight ahead. 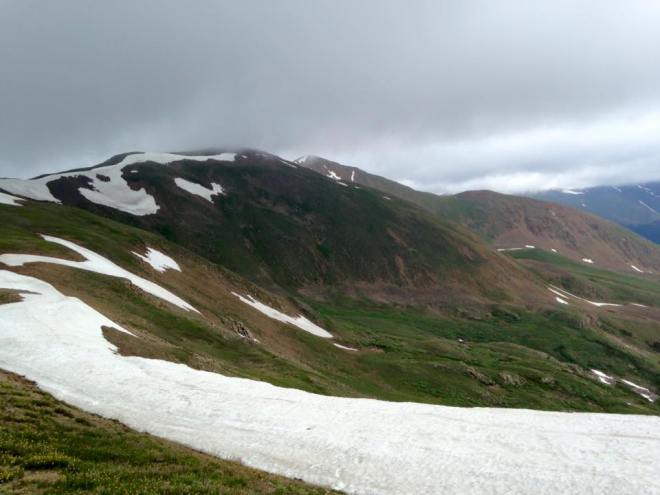 A little snow was on the route. Just one crossing here, but considerably more looking toward Mount Sniktau, which is obscured by thickening clouds.

The next thing that hit me was the weather, The atmospherics of the day – a delightfully moody mix of colors from the snow, grasses, wildflowers, the rock and the cloudcover – made this one of the most scenic jaunts I’ve had in some time. None of these peaks have the wildness of, say, the San Juans, but when you combine all of the visual elements present that day, it made for quite a visual payoff.

After runner dude left me in the dust, there was maybe a quarter-mile left to Cupid’s summit and some decision-making in the offing. There were times when the cloudcover would appear to thin, then immediately get thicker and darker. Just when it looked like rains were imminent, a break would appear in the form of a sliver of blue sky. Reading the skies is an acquired skill. Not every cloud bank is the same. You balance what you see with the time it takes to accomplish the next task, then weigh the risks. Cold rain would be one thing, but a real storm is quite another. All I had to go by was what had occurred earlier in the day (steady rains), what I was seeing now (lots of moisture in the air, but a lack of anything electrical) and what the forecasts said (a high probability of more rain and possible storms as temperatures rose). 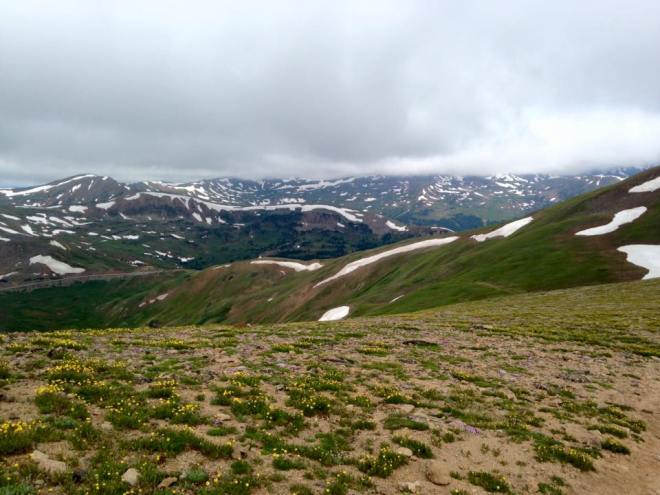 Getting closer to the top. 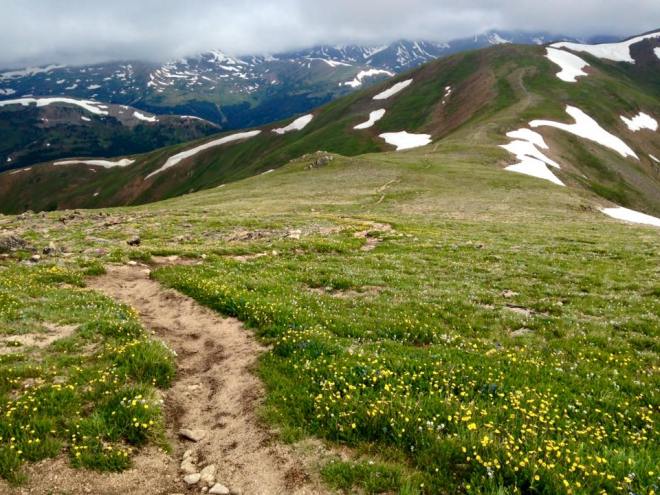 When I got to Cupid’s broad, rocky summit, I decided that Grizzly would have to wait. It would be another couple of miles round-trip, and slow going at that, with plenty of rocky, steep up-and-down hiking ahead. Who knows if the weather would have turned. So I paused at the summit, took a few pics and drank in the scenery. Not getting Grizzly would give me a reason to come back and explore more. 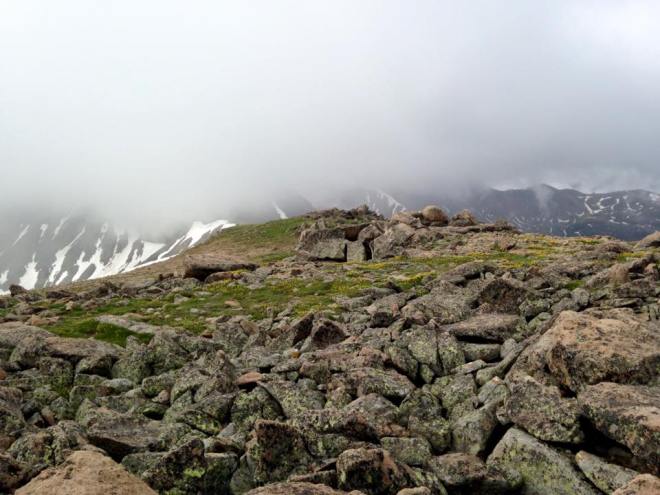 On the summit. Grizzly D and Torreys Peak are around there somewhere. 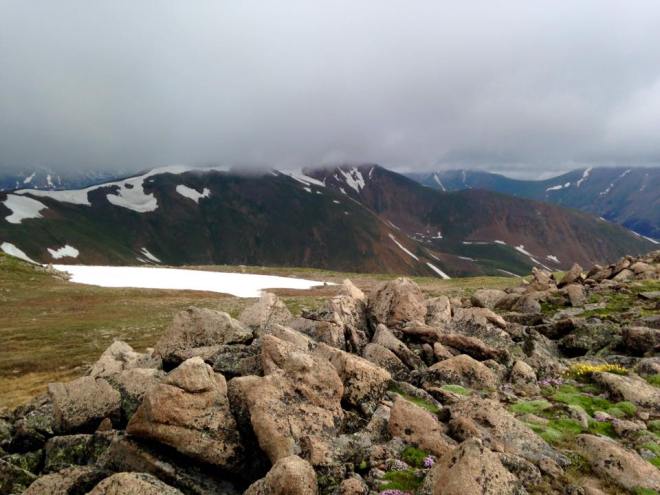 Looking toward Sniktau,still hiding in the clouds. 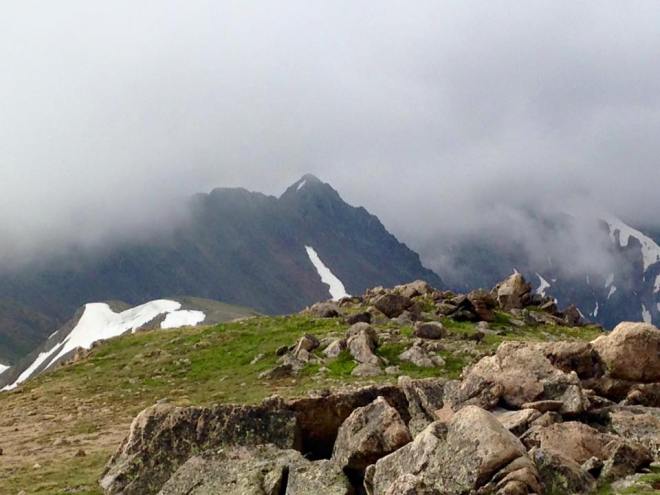 Dark, ominous and maybe a tad inviting? I say yes, but I’m weird like that.

Heading back down, I had one of those moments where the virtual world met the real one. You might remember last year when, at the Durango train station, I met Kay, a gal I knew as halfpint22 on Instagram. It turned out she was on the same Chicago Basin trip I was, and it was cool getting to know her a little. This time, I saw a gal I knew through the 14ers.com Facebook page named Elissa, working her way up Cupid as I was heading down. Elissa was working nights as a nurse, and this morning solo jaunt for her was an after-work escape. It’s always good to see people take advantage of having great hiking right by your doorstep and not mailing it in after work.

And that brings me back to why I like Loveland Pass so much. If you’re looking for a summit, a good hike at high altitude, or some time in nature alone, this is the perfect fit. You can find a little adventure an hour from home and be back in the city in time for lunch.

I can’t wait to go back. 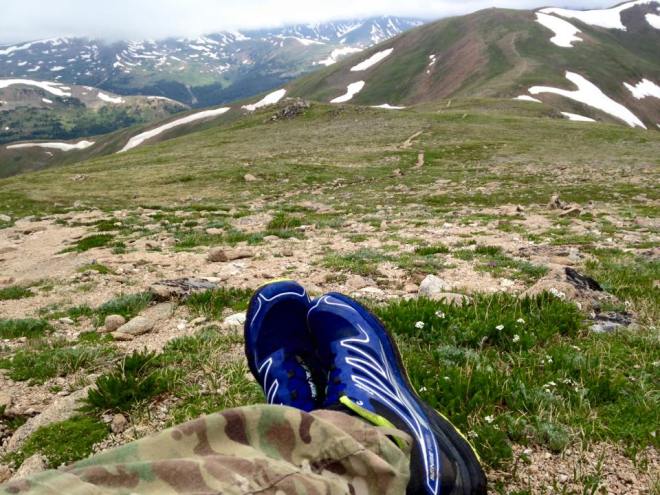 Kicking back. Fatigues by the U.S. Air Force via my brother Steve; shoes courtesy Salomon. And yes, I did some running here. “Some” running.

GETTING THERE: From Denver, take I-70 west past Idaho Springs, then exit south on U.S. 6 (the Loveland Pass exit) Drive to the top of the pass and park at the trailhead parking lot. The trailhead will be on your left as you park.

ABOUT THE ROUTE: From the parking lot, hike a sandy, steep trail on the route toward Mount Sniktau. About a half mile up, the trail has a fork. Continue straight to the top of a point that stands around 12,800 feet; the trail will split there to take you to either Cupid or Sniktau. Go right for Cupid. Your second option at the half-mile trail junction is to turn right and follow the ridgeline straight toward Cupid. This is the easier and shorter option.

Following this trail, it will hit a steeper portion to gain the ridge proper. The trail then follows the ridge to Cupid’s summit. Round-trip, it’s about three miles. Most of the route is Class 1 hiking, with some of the steeper and rockier portions rated Class 2.

EXTRA CREDIT: Continue from Cupid’s summit to Grizzly Peak D. And if you hit that point, Grizzly D connects to 14er Torreys Peak, and ultimately, Grays Peak, the highest point in the Front Range and on the Continental Divide.