A couple of days ago, I wrote about a developing big-win story for conservation efforts in my hometown of Tulsa. I was feeling pretty good about that, able to block out the signs that there was going to be plenty of bad news on the conservation front coming soon. For now, though, we celebrate. Good vibes all around.

And then one day later, the other shoe dropped. Budget-makers at the Oklahoma Legislature asked the state’s tourism department to come up with a plan to accommodate a 14.5 percent budget cut the next fiscal year.

I could write an entire post about how lawmakers’ reckless tax policies over the past decade or so led us to this point, making the state especially vulnerable during difficult economic times. Schools, health, public safety and child welfare have taken huge hits in Oklahoma over the years, in economies both good and bad. But I’ll let others discuss that. Instead, I’ll focus on what the Sooner State could lose if this plan becomes reality, and what this says about the national movement to turn over federal public lands to the states.

Here’s a list of parks and facilities Oklahoma could lose:

I haven’t been to all of these, but of visited several of them. Greenleaf State Park is an awesomely hilly, wooded and wild place in eastern Oklahoma that’s long been a favorite for the outdoorsy set. Alabaster Caverns State Park features great caves to explore, is one of the few places you can go caving, and is prime habitat for bats. Osage Hills State Park is a hidden gem, nestled in wooded hills northwest of Tulsa. Red Rock Canyon State Park offers prime rappelling.

Last summer, I made a point to explore another one of these places, Natural Falls State Park. I wrote about it here. Here are some scenes from Natural Falls:

A stretch of rugged trail at Natural Falls State Park.

All of these could face closure if these cuts become reality in the state’s next budget. Needless to say, this would be a huge loss for the state, its residents, and the tourism industry that Oklahoma is promoting on its new license plates. The irony is pretty thick with that one. 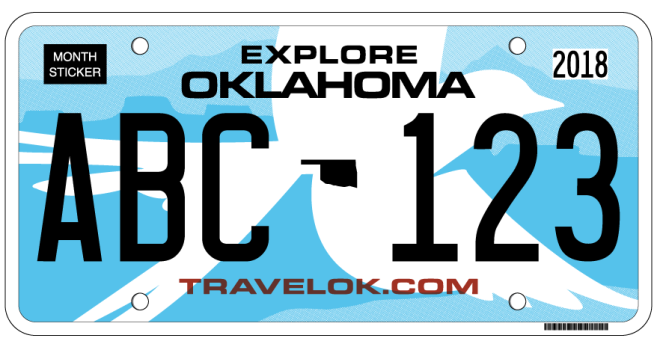 The plate encourages drivers to “explore Oklahoma” and visit the state tourism department’s website, travelok.com. But there might be less to explore really soon.

The larger point: Oklahoma is showing why you don’t want to hand over federal public lands to the states. Oklahoma is just one of many states to pursue the Kansas-style form of tax policy, that lowering taxes will increase job growth and eventually lead to higher revenues. That hasn’t happened in Kansas, and it sure isn’t happening in Oklahoma, Louisiana, and many other states that are experimenting with this. Instead, it’s leaving states unable to fund even basic, core functions of state government.

In Oklahoma, we can’t pay our teachers enough to compete with surrounding states, and they’re leaving in droves. Our state troopers can only drive so far from their headquarters to patrol the highways. Our prisons are staffed at 65 percent with underpaid guards who often have to resort to food stamps to feed their families. Is there any doubt that Oklahoma could not handle the added cost of taking over its part of the Ouchita National Forest, or the entirety of the Wichita Mountains Wildlife Refuge? How much greater would this burden be on cash-strapped western states where the federal public lands inventory is much larger?

And maybe that’s the end-game, to give public lands back to the states, who, when forced to carry that burden, have no choice but to sell it all off. We know where that ends: Wide-scale privatization, which means loss of forest, loss of grazing lands, and loss of public access. The list of those who lose — hunters, anglers, hikers, backpackers, climbers, cyclists, ranchers, tourism businesses and more — is lengthy.

Oklahoma’s budget process is still in the early stages, and it’s not certain what will become of its parks. There is already a petition going around to save the parks. But in the big picture, Oklahoma is the canary in the mine when it comes to public lands and land management policy for federal lawmakers and policymakers. Voters favor longstanding public lands policy that preserves national parks, forests and other federal holdings for use by the people. Adopting a policy of divestiture in favor of state control will do exactly the opposite of what the majority of the public wants. And by looking at what’s happening in Oklahoma, we know what the end result will be: a rapid loss of public access to treasured natural spaces in favor of the highest bidder.