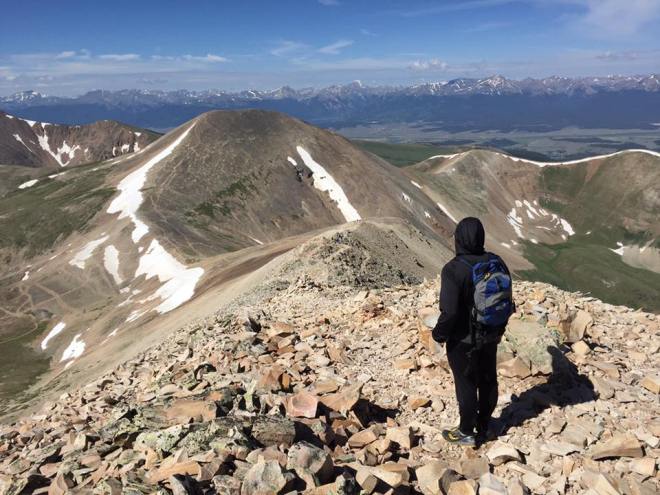 There is a certain satisfaction with finishing a job with the person with whom you started it. Maybe it’s something you build together, or a shared journey.

This summer, I concocted a plan to do something like that with my nephew Jordan, part of the Colorado contingent of my family and my oldest brother’s son. We talked the year before about heading into the mountains to hike some of the 14ers, and we ended up with a fantastic day doing the four-peak loop called the Decalibron – Mount Democrat, Mount Cameron, Mount Lincoln and Mount Bross.

Prior to that, Jordan’s sole mountain ascent happened when he was far younger, a trip up Mount Bierstadt with his dad. Now 25 years old, he may have caught the 14er bug a little. It seemed natural to polish off the Mosquito Range 14ers together with a hike up Mount Sherman.

In the previous days, I’d spent some time hiking in New Mexico, then snagged a couple of 13ers in Colorado’s Front Range two days later. I needed to force my body to be ready for bigger challenges, namely keeping up with Jordan.

While it might be true that I have a few more peaks under my belt then he does, it is also true that I’m 22 years his senior. I live around 700 feet above sea level, he lives in Denver. And over the past couple of years, the dude has gotten serious about his conditioning.

He is preparing for the Spartan race in a couple of weeks, where he intends to take on the Beast course: 13 miles or so, and tons of obstacles. He’s done the shorter version of the race, but now is looking to tackle something much tougher. Needless to say, many months of running, lifting and thought-out eating have turned him into a lean, muscley human built to fly through the course.

Me, not so much. Usually my thoughts when it comes to food are limited to wondering if it will be a burrito, barbecue or bacon. I’d already conceded the fact that he’d be waiting on me the entire trip. I asked Jordan to be patient. He was good for it. 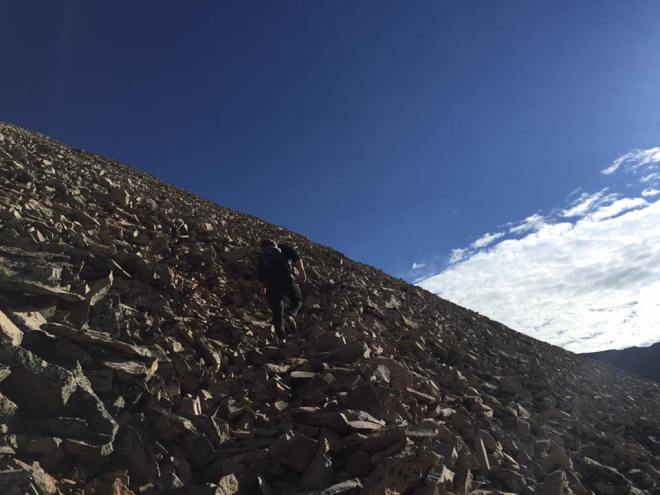 Jordan heads up the talus slope toward the Hilltop Mine. We thought this was “the route,” but it was a good, scenic side trip up the mountain.

A lot of life had happened since we last met up. Jordan has numerous interests. Sports, broadcasting, the outdoors, fitness, and going back to his high school and college days, music. Hip-hop, to be more precise. Jordan made an album years back, performed some live shows in front of decent crowds, but set it down for a time to focus on getting his college coursework done and a television career off the ground.

But he’s circled back to music. It’s something we talked a lot about on the way up, listening to a few songs he’s already recorded, as well as a couple of miscellaneous tunes that grabbed our attention. I’m no musician, but I love talking about music and it’s interesting to get a real musician’s take on what’s out there. The topic is also a great way to stay awake when driving into the mountains when most people are still fast asleep.

There was something else in these discussions, too. Music is a way that Jordan works through things that he sees, whether in his own life or in the world at large. The creative process is a way of hashing it all out, much in the same way people take up running to work out their demons or gardening to calm their spirits. I get all that. Writing does that for me. As well as running, or hiking, or even hitting the iron at the gym. I’ve got issues, man. That explains the numerous venues I use to deal with them.

In any case, these methods of processing the world are mostly solitary endeavors. If you want to dig deep, talk to “creatives” about why they do what they do, and what’s behind a particular song, artwork or essay. As the highway snaked its way over hilltops and down valleys, we caught up on the small stuff and probed the bigger things that were on our minds. I’ve long believed that there is something medicinal about good conversation on long drives in remote places. Every new trip confirms it. 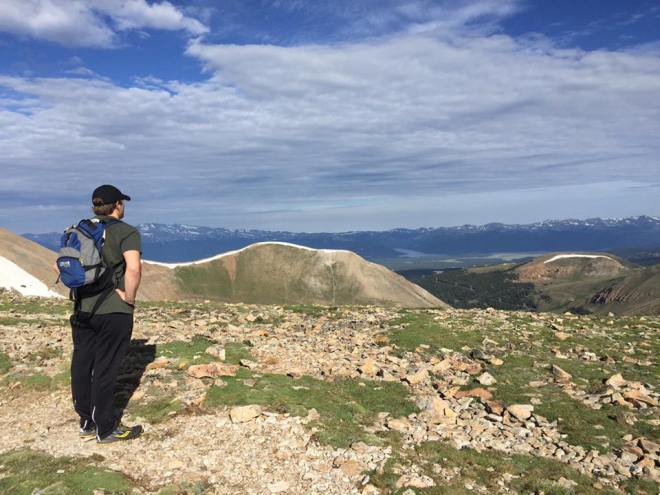 At the saddle between Mount Sherman and Mount Sheridan.

Sooner than we expected, we were on the long dirt road leading to the Fourmile Creek trailhead. It wasn’t nearly as rough as the upper part of the Kite Lake Road at the foot of Mount Democrat, but it was slow going. A bumpy but not particularly demanding ride just about any car could handle.

Upon arriving, we saw a familiar setting, namely the remains of defunct mines that are common throughout the Mosquito Range. We also got a look at something more spectacular, that being the impressive namesake face of Horseshoe Mountain, a high 13er nearby that is jaw-dropping to behold with its semi-circular face resembling that of a massive coliseum. It’s an impressive sight, and I get why people come back to hike that one. I’d do it for the visuals alone.

Mount Sherman is another matter. It’d say by 14er standards, it’s fairly ordinary. Not too steep, and no real distinguishing landmarks – say, like Longs Peak’s Diamond, or Wetterhorn Peak’s prow – to set it apart. But it is still a big mountain that commands the skyline, and it has a few treasures of its own that make it worth the trip. 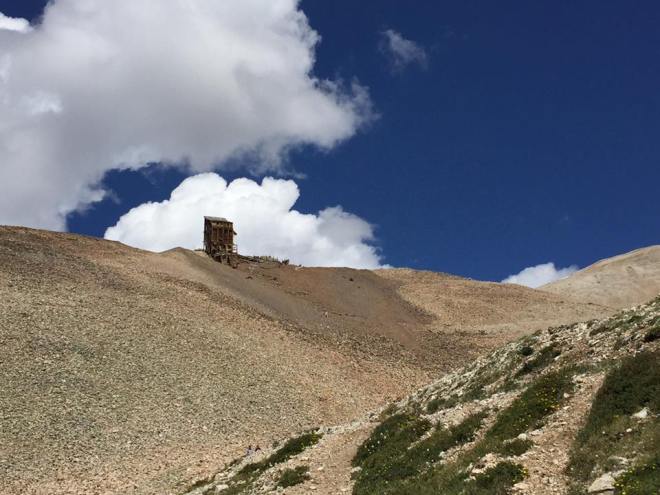 The Hilltop Mine seen on our way down. This is one of my favorite pictures I’ve ever taken from the mountains. It’s surprising what pops up as memorable on these peaks.

I mentioned those mines. The one near the trailhead is just flattened ruins, but other mining features higher up are more fetching. The backdrop of a crisp, blue sky and pillowy clouds, set against the muted tones of the mountain stand in stark contrast the weathered, beaten but still resilient structures of men who sought their fortunes in high country minerals.

It’s about here when I got a fuller appreciation of how many trails there are on this mountain. Many high peaks are limited to a couple trails, but on Mount Sherman, side trails criss-cross the peak like a spiderweb, partially due to all the mining that occurred here, and partially from hikers taking different paths, I’m sure. Standing next to the Hilltop Mine, we had to go down again to gain Sherman’s summit ridge. An easier route showed itself to our right. I’d remember that on our way down.

As expected, there were plenty of people on the mountain. Ease of access and favorable weather guarantee crowds, even on a weekday. But we didn’t come to Mount Sherman looking for solitude. For that, you’re going to need to go to more remote ranges, and probably ones without that magic 14,000-foot number attached. We came here to finish a job.

Higher on the summit ridge, I realize we’ve fallen into a bit of luck. Sherman has a reputation of being a windy peak, yet on the narrowest part of the ridge, fully exposed to the winds, we were in the middle of a calm day with wispy clouds and blue sky all around. It’s cool, yeah, but just like last year in the Decalibron, we were in good conditions making great time. As expected, Jordan was plowing ahead at a pace slowed only by him waiting on me.

The “skinny” portion of the summit ridge on Mount Sherman.

We came up to a narrower section of the summit ridge, and I must admit, it was airier than I thought it would be. Not anything scary, but more of a pleasant surprise. So many of the peaks in this range as well as the distant Sawatch Range are massive lumps of rock that can be dreary slogs above timberline. One hiker mentions to me that he thought it was “sketchy.” I guess sketchiness, airiness, and exposure are all in the eyes of the beholder. For me, a little air to the left or the right (or both) is interesting.

In less than two hours, we were at the top, taking in the scene with a dozen others, including a family with kids, some out-of-staters, and a smattering of Coloradoans.

It dawns on me that this is the thirteenth time I’ve shared a summit of a family member. Five with Jordan over the past two years, plus the rest with brothers, nieces, nephews, in-laws and my wife. That’s nearly half my total number, and I like that figure. It’s good to know that partners may not be hard to find in the future, though I still intend to call upon friends as well.

On our way down, Jordan and I started talking sports again. Football season is approaching, and we’re wondering if the Denver Broncos will make strides from the previous season or revert to the mediocrity of the pre-Manning, post-Elway years. Time will tell on that subject, which really isn’t that important but is debated as intelligently and fully as anything in the realm of current events, politics, religion or whatever else. That’s the great thing about sports. We can dissect the Broncos’ moves on its offensive and defensive lines, maybe argue a bit over the merits of one player over another, but not face the existential crisis and warlike musings of the current political climate.

Before long, we were down. Storms started to build around the mountain. People like us were coming down, but others still going up. Given all the information out there about safety in the mountains, this astounds me. But some people have to learn by experience.

Our experience, on the other hand, is something else. Both of us have changed over the past year. We’re learning things and trying to apply those lessons to our lives, then share what we know while driving to trailheads, hiking trails and lingering on high summits. Each new mountaintop adds not only to our alpine experience, but to knowledge passed along by peering into each other’s worlds during those hours unplugged from “normal” life.

Me, with the Hilltop Mine and Mount Sherman’s summit in the background. (Jordan Doucette photo)

GETTING THERE: From Denver, take U.S. 285 southwest toward Fairplay. Continue south for a mile and turn right on County Road 18. Drive on this road for about 10 miles to the trailhead.

ABOUT THE ROUTE: From the Leavick Mine site, follow the trail (road) and veer right to skirt the ridge that leads to the Hilltop Mine (it’s a freestanding mine building on top of a ridge that can be viewed low on the route). There are many side trails throughout the lower part of the mountain, and most of them lead to the summit ridge. Hike the trail and gain the summit ridge. From here, the route is straightforward. Just short of the summit, the ridge narrows significantly, and this is one of the windier parts of the mountain. Once past this, the route eases. The true summit is about a 100-yard walk from where the ridge flattens out. Class 2 hiking, 5.25 miles round trip, with 2,100 feet of elevation gain.