I’m not sure how you do road trips, but my normal pattern has me going from Point A to Point B as quickly as possible. I want to get there, have my fun, and avoid dragging out the long drive home.

But there is something to be said for sacrificing a little time to enjoy the little distractions along the way. They might slow your journey, but sometimes that’s not a bad thing. I found one of my favorite barbecue joints in Salina, Kan., just because me and my travel buddy had a craving for pork. We blew more than an hour there, and it was worth every tasty bite.

On my last trip out west, we took a couple of stops to examine some scenery in northwest Oklahoma. The Sooner State is known as a prairie state, but there are some unique bits of scenery that are worth a stop.

Glass Mountain. Or Gloss Mountain? Whatever. It looks cool.

Gloss Mountains State Park contains loads of mesa-like formations like this. There is a bunch of hiking throughout this park, and it’s a cool contrast to the gently rolling plains that dominate the scenery in northwestern Oklahoma. The park is just east of Woodward, which, by the way, is home to another great barbecue find, Wagg’s. Trust me on this one.

Dramatic skies help frame the shot of this formation in the Gloss Mountains.

The Gloss Mountains were on our way to New Mexico, so it’s not like this stop took lots of time. But seeing Black Mesa on the way home would be a much longer detour. Again, totally worth it.

Black Mesa is in the far northwest corner of the Oklahoma Panhandle. Cimarron County is as flat as a board. But that changes abruptly when you get to area surrounding Black Mesa. One minute you’re in flat, high plains prairie. The next, you’re driving around and between high cliffs and hoodoos. 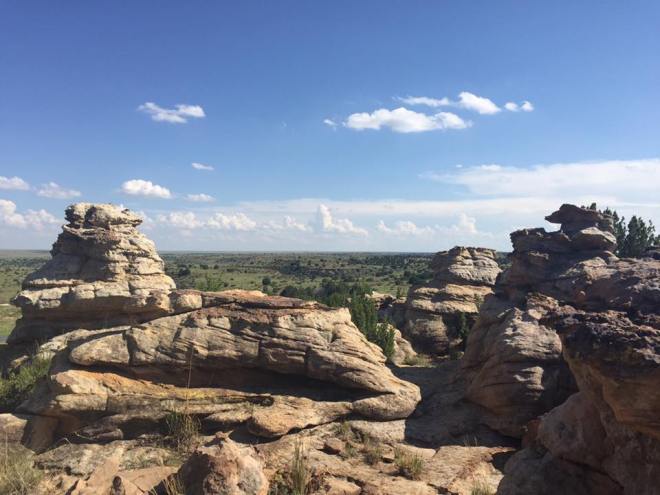 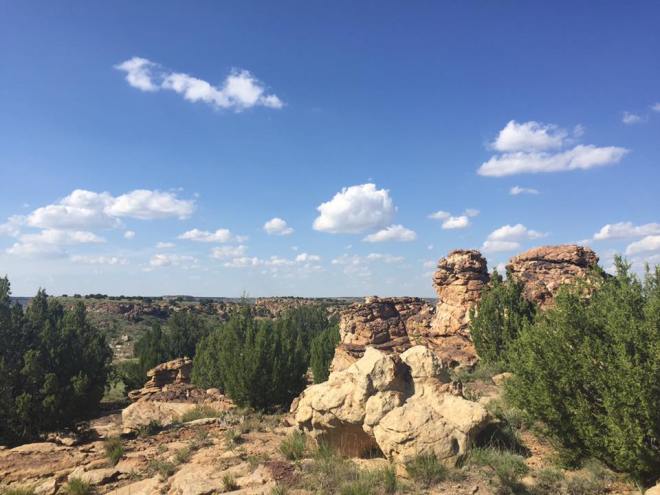 More hoodoos. There is also the remains of petrified trees at nearby Black Mesa State Park.

In some ways, Black Mesa is the easternmost outpost of the southern Rockies. Lava flows filled ancient valleys eons ago. As softer rock and soil eroded over time, Black Mesa’s harder volcanic rock remained. The Black Mesa summit is Oklahoma’s highest point (4,975 feet above sea level), and has a good trail to the top. As you drive west into New Mexico, more of these formations are visible, as well as a number of dormant volcanic cinder cones. All of these arise just before the Rocky Mountain uplift soars into the skies west of places like Raton and Cimarron. So yeah, Black Mesa is sort of where the Rockies and the high plains meet. It’s a cool place. 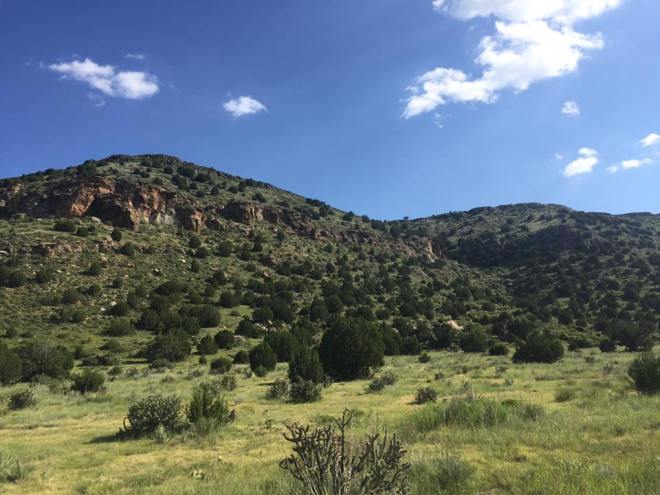 Black Mesa. Very green for this time of year.

Another shot of Black Mesa, near the trailhead. The formation is huge, so you’re looking at a small corner of it.

Near Black Mesa you can see dinosaur tracks. A number of bed and breakfasts operate near Black Mesa, and the natural setting of Kenton, a small town nearby, is about as scenic as you can get in this part of the world.

Going here added about 90 minutes to our return trip, but it was worth it. Cedar, cactus, sage and shortgrass carpet these rugged lands. If you’re looking for a place with an Old West feel, Black Mesa has it.

Anyway, all this is to say that if you have the time and can pull over from time to time, do it. You never know what  you’ll discover, or what you’ll learn from out-of-the-way places. And if you’re really lucky, maybe you’ll find a spot with good ribs.