Cruising over the waters of Toledo Bend Reservoir, Texas.

Another Black Friday came and went, and for the third straight year, a good chunk of the masses decided to forgo the sales and head outside. Kudos to REI for kickstarting the #OptOutside movement, and everything it symbolizes (specifically, what it must mean to its employees).

For me, it’s usually meant hiking or trail running. But this year it was different. A good chunk of my family met up at a lake house on the shores of Toledo Bend Reservoir in east Texas for the holiday, and anytime you’re at a lake like this one, time on the water trumps all.

My niece’s husband is definitely a lake guy. Fishing, water skiing or just cruising around, he loves the water. Back when Liz and Mitchel were dating, he picked up a boat for $300, with some wondering if it would ever be seaworthy. Mitchel had it on the water that day.

The boat has been nicknamed the Black Pearl. Great name for this vessel, as it may be a bit worn, but pulls its weight and has a bit of a legend. You can fish from it, pull a skier and, amazingly, get some work done. As it turns out, the Pearl has a history that goes beyond being a reclaimed wreckage.

Back when Hurricane Harvey was busy dumping a year’s worth of rain on Houston, many neighborhoods were flooded. Folks were trapped in their swamped homes, with nowhere to get food, water and decent shelter. A call went out for people with boats to help these folks out.

Enter the Black Pearl, with Mitchel and Liz helping some folk escape flooded homes to safety.

Flooded Houstonians get a lift to safety on the Black Pearl after Hurricane Harvey.

Over the weekend, we used it to pull of 50-foot log off a beach, haul it to boat ramp and eventually cut it into sections that were used to line the out ring of a now under-construction fire pit. 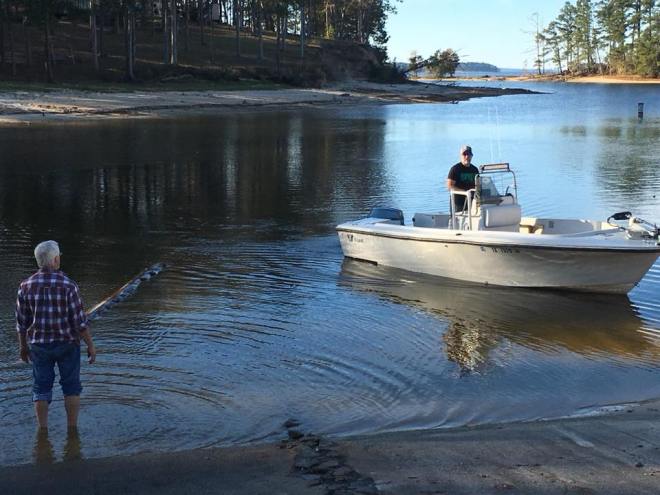 Reclaiming some driftwood for a project at my sister’s lake house. It took some doing, but Mitchel and his trusty boat got it back to shore and ready for the job.

As it turns out, the Pearl is a good working boat.

But Black Friday on the Black Pearl was more about fun. We took the girls out for a cruise, checking out flooded trees on the lake where eagles had their nests. The lake is lined with houses of varying sizes, but it also is dotted with islands and surrounded by the Sabine National Forest and state park land on the Louisiana side. Toledo Bend is a popular destination for bass fishing tournaments, and plenty of anglers were on the water.

We mixed up our cruise with full-throttled blasts and slower runs to see the sights. Sunny skies and cold beer mixed nicely with the tunes playing from on-board speakers in the bow. It was a great way to kill a couple of hours before dinner.

Mitchel in his element, piloting the Black Pearl. 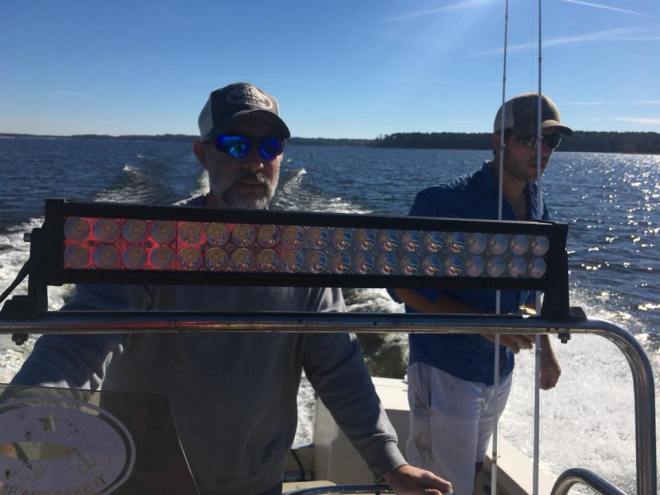 My turn at the wheel. I haven’t driven a boat since I was a kid.

The next day featured some free time and calm waters. I’d been eating a ton, so some exercise seemed appropriate. Poking around the garage, I found a flatwater kayak and all the gear needed to go out on the water.

The kayak was hot pink. All that was missing were some My Little Pony decals to complete the picture, but I didn’t care. That sucker was going in the water with me in it.

Something to keep in mind: I’ve never been in a kayak. Canoe? Sure. Many times. And rafts. But never a kayak. 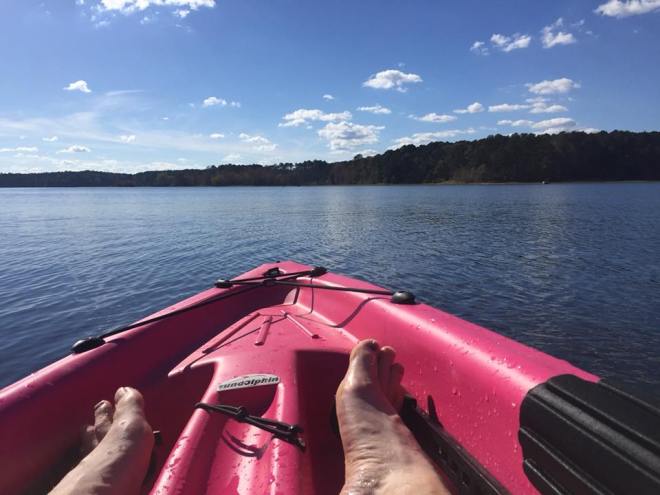 This was a good time with a good view.

It takes some getting used to. Since this was a shorter boat, keeping it straight was a bit of work, but manageable. Every now and then I got into a rhythm, paddling outside the main boating channels and staying relatively close to shore, never more than a few hundred feet from the beach.

At times, I’d stop paddling just to listen. If there weren’t any boats speeding by, the quiet was interrupted only by the water lapping against the side of the hull.

What I found is that type of gentle quiet is very similar to what I experience when I stop in the middle of a hike just to listen to the sounds of the woods or the breeze atop a summit. With so much noise around us at all times, we need those moments of quiet. Life has been pretty noisy lately, so those couple of hours on the kayak were a soothing balm.

Even though I live close to a number of lakes, I’m more of a trail guy. I don’t think that’s going to change. But mixing things up has its perks, and there’s plenty of good to be found on the water. And just like those #OptOutside days on the trail, Black Friday on the water was way better than fighting crowds looking for the next-best deal on the next-best doo-dad. Gimme a power boat or a kayak any time.

4 thoughts on “#OptOutside on the water: Toledo Bend Reservoir, Texas”