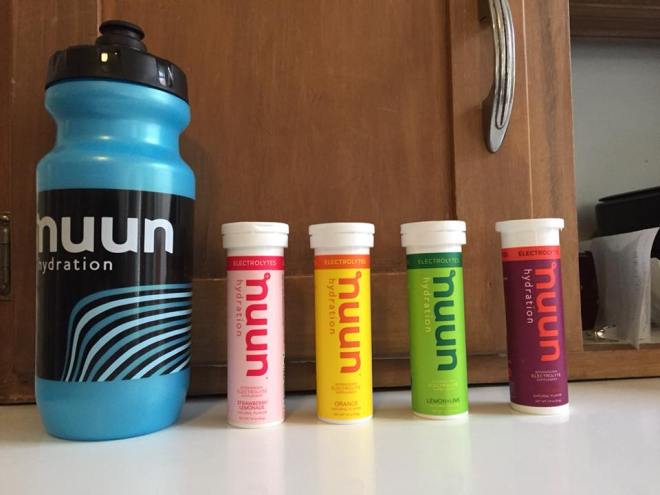 Sometimes I get lucky. A few months back, I found out I was a winner. A winner of stuff!

Race Advisors – a cool outfit that publishes reviews of races from all over – does a weekly giveaway to its social media followers, and my name turned up. What I got: A package of Nuun Electrolytes, made by a company that specializes in performance nutrition you need without all the sugar and other “extra” stuff that comes with so many other sports drinks and supplements.

I’ve heard of Nuun before. They’re all over the place on all things running. Part of the deal were four sleeves of tablets that I was free to use. At the time, summer was just getting ready to start, so this was a great time to do some experimenting.

Technically, each tablet of Nuun Electrolytes is designed to supplement 16 ounces of water with sodium, potassium, magnesium and calcium. When you work out, you sweat a lot. And that means more than losing just water. Certain nutrients are also lost, minerals that are essential to proper body function, especially during exercise.

But how does it work? Think of this visual: Have you ever used Alka-Seltzer? It works just like that. You take a glass/bottle of water, snag a Nuun tablet, and drop it in. It dissolves in effervescent fashion, and in about a minute, presto! You have an electrolyte-infused drink to replenish your body. It’s got 10 calories a pop, and a remarkably short ingredients list.

My guess is you can use this in one of two ways: Prepare the drink beforehand and bring a bottle of it with you as you run (for longer runs) or use it as a recovery tool after a hard workout.

HOW DID IT DO?

Over the summer, my miles drop. It’s freakin’ hot in Tulsa, so there aren’t many long runs happening for me. But when I run, I work hard and sweat a lot. If I’m not hydrated perfectly, those wonderful dehydration headaches appear, and I’m lethargic as can be, even if I down a bunch of water when I’m done. So my test was simple: Would Nuun help me avoid both?

I burned through a few tubes of Nuun tablets over the course of three hot months of running. So this isn’t a “try it a couple of times and review it” sort of test. I know I’m only one guy, but I think the duration of usage should count for something.

I’m also what might be called a “high-demand” person when it comes to post-workout recovery. I sweat buckets, even in mild temps, so that means I’m losing a lot of water and electrolytes at every workout.

The taste takes a little getting used to. It’s not sugar-sweet like a lot of popular sports drinks. My advice: Let the tablets dissolve for a minute, then drink. It goes down pretty good then.

But I also think it did its job. Sixteen ounces of a Nuun-infused drink definitely helped curb those headaches. And yeah, I did notice that the post-workout sluggishness that usually happens after a super-heated 90-minute workout was noticeably blunted. So that’s a win-win.

A further test would include taking a water bottle with Nuun in it, but I didn’t go that far. However, I do have numerous long runs planned in the coming weeks, and maybe that will be a good time to test it further.

But the bottom line is Nuun advertises that it not only helps you hydrate, but replenishes valuable minerals the body needs to keep working and recover more quickly. So far, so good. It seems to have done the job for me.

Disclaimer: Nuun and Race Advisors furnished me with four sleeves of tablets at no cost to me, and with no obligation of review or promotion.