Once my fall races ended in November, I did a major re-think about how I scheduled my time. It seemed I was devoting six days a week for training toward some sort of goal, be it a race or some arbitrary strength metric that usually meant I was sticking close to home every week so I wouldn’t miss a workout.

That meant that I was crowding out some of the thing I loved. It made weekend road trips nonexistent. Any hiking had to be within minutes from my house. It’s very limiting, and it showed: For all of 2018, I only went on two trips outside my city to go hike or climb something. Those were awesome trips, but too few in number. It’s hard to get your outdoor fix when you’re tethered to a schedule that’s tied to the places you run or lift.

So I resolved to do a couple of things. One was to keep Saturdays free. That way I could at least take a day trip somewhere new. The second was to make sure I was doing things that would help me get in “mountain shape.” There are only so many ways a flatlander can prepare for the rigors of altitude, but I can do things to help me get used to carrying a pack, hiking long miles and getting some vert. I know that sounds a lot like “training,” but I don’t see anything wrong with injecting some utility in the fun you’re having.

Gradual uphill near the trailhead.

Last weekend, I went to a place I’ve visited a couple of times before: Robbers Cave State Park in southeastern Oklahoma. The southeast quarter of the state is different than what most people might think. Oklahoma conjures images of sweeping plains and flat prairie, and that’s true for much of the state. But in the southeast, Oklahoma has a small mountain range with good-sized hills and ridges covered in hardwood and pine forests. Robbers Cave is the first place I ever tried rock climbing, and offers a nice introduction into the Ouachita Mountains that rise over sections of Oklahoma and western Arkansas.

One plus to this trip: Robbers Cave is only a couple of hours from my home. And once you get south of Interstate 40, the countryside is gorgeous. On the negative: I spent the previous night binge-watching “An Innocent Man” on Netflix (I recommend it). As in the whole series. So I went to bed very late and didn’t get out the door until late morning.

There are a ton of trails at Robbers Cave, so much so that there is going to be an ultramarathon held there next year, the Outlaw 100. Given the hilliness of the terrain, I’m going to say that this will be a challenging course. My goal was to hike the Mountain Trail, a 7-mile out-and-back that is one of the tougher trails in the park.

I got there two days after the state had received a good 36 hours of on-and-off again rain, so the trail was soggy in spots, especially down low. Just getting off the trailhead involved a stream crossing, one of several I’d make through the day.

The trail starts out as a long, gradual uphill before topping out, then descending to the shoreline of Lake Carlton. It’s an easy shoreline walk before the trail reached the base of a sizable cliff face that had a few running waterfalls. A steep climb led to somewhat exposed trail sections by a series of clifftops overlooking the lake before turning to a more gradual uphill section. A couple of miles in, the trail went on a quick, moderately steep downhill that led to a freely flowing creek at the bottom of a ravine. 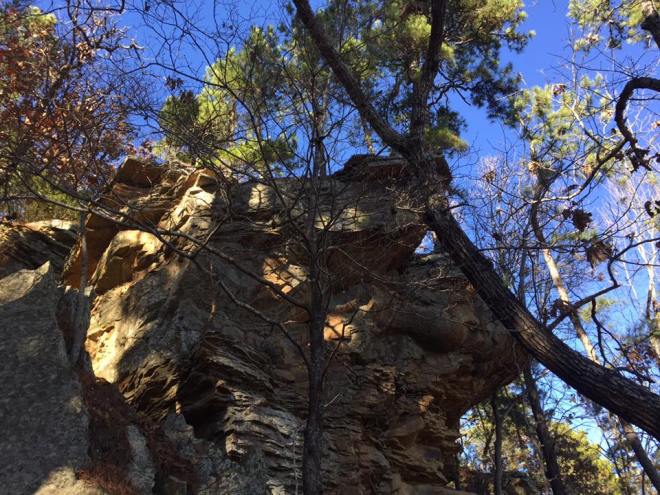 I stopped there to eat and contemplated what to do next. My late start meant that hiking the entire trail was probably out of the question unless I wanted to hike in the dark. Ahead of me was a third uphill climb, and the biggest one of the hike. I had to call it a day there and turn back to the car. Maybe next time.

One of the great things about this hike was I had solitude for almost all of it. A group of kids wandered down to my lunch spot, but other than them, I saw no one. The forest is beautiful: Southeastern Oklahoma and northwest Arkansas have incredible woodlands of big hardwoods and tall lodgepole pines. I loved the look of it, especially as the sun began to sink and pierce the woods with golden light and long shadows.

On the downside, the trail is never far from the lake, and the noise of campers hanging out there. You can also hear highway traffic that’s close by. So while the trail has a wild feel, it’s definitely not a wilderness experience.

Look at how green that is!

But if you can get past that, it’s a place with big views and a lot of natural beauty. Add to that the availability of rock climbing, rappelling and trout fishing elsewhere in the park and you have a place with a ton of outdoor recreation options. Camp sites run start at $14 a night for tent camping.

One last note about the trail: I was surprised with the amount of elevation changes on the route. I mean, we’re talking about a Southern Plains state, so huge vert is never going to happen. But if you do the entire Mountain Trail, you’ll get more than 1,200 feet of vert for your trouble. That’s good training for people wanting to hike in mountain terrain. The trail is extremely well-marked with blue blazes, decently maintained and straightforward to follow. It’s mostly class 1 hiking, with some rugged class 2 sections near the clifftops. Unless it’s been dry, expect at least five mellow creek crossings on the hike.

After doing some hikes on my local trails in Tulsa, it was cool to see something new and more challenging on this outing. And plans are already in place to do more. Stay tuned, because some awesome destinations may be on tap.