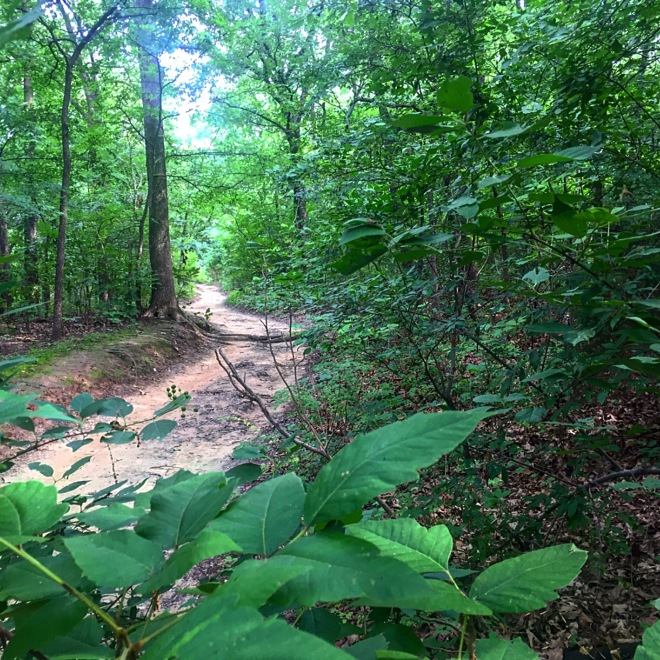 Look how green that is.

The weird weather cycles have kept me away from the trails of late. We get big storms, huge rain dumps, maybe a day of no action, and then it starts all over again. It’s been like this for a couple of months now.

It’s not that I’m shy about getting dirty. I’ve gone through plenty of mud. But a big part of me believes in giving the trails a chance to dry out before I beat them up with my boots. It’s been too long, though — too many rained-out weekends, too many tornado warnings, and too much flooding. I’ve put in enough road miles. My feet need more dirt and less pavement.

I finally caught a break this week. The rain backed off long enough for me to get out on the trails and at least hike a few miles. Man, I needed that.

All this went down around the same time another series of articles came out extolling the benefits of spending at least a couple of hours every week in nature. Not in a park, or in your yard, but in true natural settings like a forest. You don’t get the same sounds, smells and sights in man-made “natural” settings as you do in the woods.

What I noticed was the change of seasons. It’s summer now, and the forest has, indeed, moved on from spring.

Seen on the trail: things that grow.

First of all, the foliage has gone from that bright “new growth” green of spring to a more mature, deeper shade. It’s still dense — the heavy spring rains have guaranteed that. But the greens are darker, maybe even flatter, as trees, bushes and grasses maximize their ability to turn bright sunlight into sustenance.

The sounds are different, too. In the spring it was all birds, all the time. The birds are still there, but they’re quieter. Instead, you hear the bugs. The heat of summer seems to liven up the chirping, buzzing, screeching insects of the forest to the point of being loud. Summer songs of the woods are distinctly invertebrate.

Then there’s the heat and humidity. If you’re living anywhere in the Sunbelt, your attitude toward summer hiking has to come to terms with the fact that you’re going to get very sweaty, kinda smelly, and feeling a bit gross when it’s done. Maybe well before that. If you’re cool with that, you can enjoy yourself as long as you’re hydrated. If not, well, you’re going to end up waiting a good four months for the temperatures to come down.

I don’t plan on waiting. I’ll take the sweat and get my miles as long as the seemingly ceaseless train of storms doesn’t wash me out.

Summer in the woods.