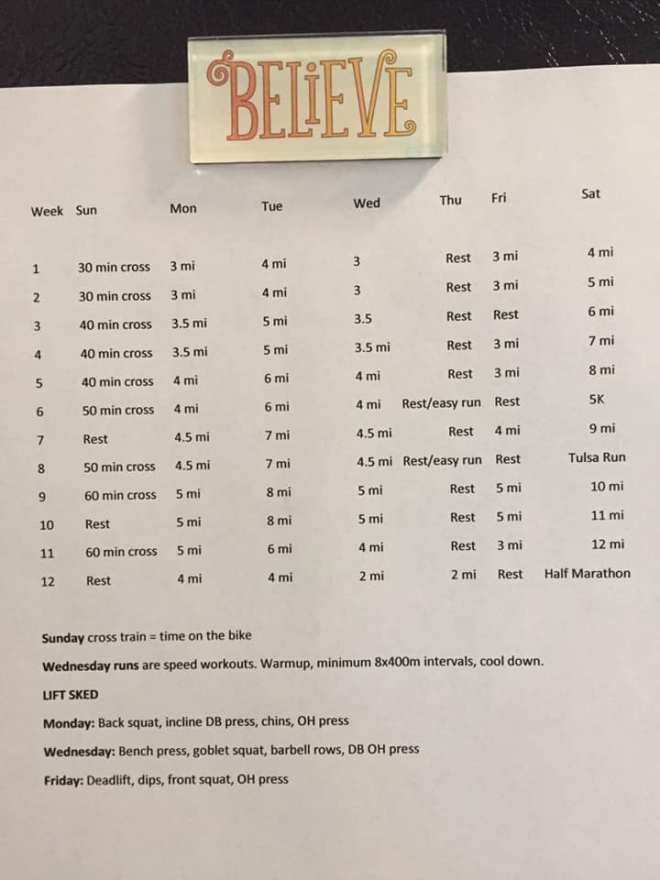 My master for the next 12 weeks.

The start of September tells me a couple of things.

First, it’s not really fall. Not here, not now. I’m looking at sunny skies, high temps in the mid- to upper-90s, and no sign of that alleged crisp cool air of autumn anytime soon. So that means I’ll be sweating plenty on any given run for at least a few more weeks, if not longer.

Second, it’s the beginning of the fall race season. I don’t race much in the spring or summer, because frankly, I don’t do fast when it’s hot. I like it cool to cold. But getting ready for longer races takes time, so training for those distances (a half marathon in this case) takes a little time.

I was stung a bit by my underwhelming performance in the Rockies back in July. My pride took a hit from not being able to manage even one alpine summit. Just the nudge I needed to jump on that fall schedule and get cracking.

It’s nerdy, but I really got into making up my training schedule. Figuring out distances, where to schedule races, and when that blessed taper week rolls around just before my goal race. I made a grid of sorts, with each day’s workout planned to the exact mile, and even included a weight training schedule with specific exercises to be performed. I’m experimenting with speed workouts. Basically throwing myself into this thing, temperatures be damned, because I don’t want the year to end having accomplished nothing.

I know I shouldn’t let a leisure activity define me. No one cares if I summited zero peaks this summer or a hundred. They don’t care about how fast or far I run, or how much I lift. But it still drives me. I suppose the things I do in my free time just matter to me more, at least internally. Goals are useful if they make you better in some way, either by achieving them or at least trying.

And maybe that’s the real value. I’ve met awesome people in the running community and on the trail. Some real bosses at the gym. People who inspire me, who teach me, who push me to do better and be a little more.

The only negative of the fall for me is that as I run more, I have to lift less. Again, no one else really cares about this, but I’ve been a gym rat for decades now, and strength training is a familiar discipline to me, a companion that has been as faithful as any other. I’ll still lift over these next 12 weeks, just not as much. That puts strength gains on hold for a bit. 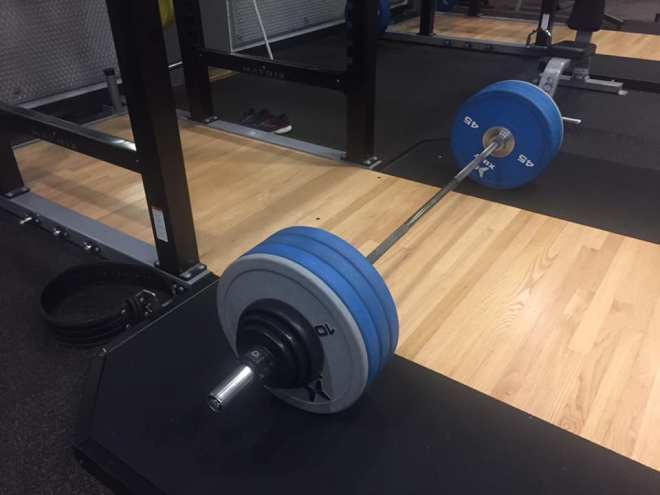 But I did get a last hurrah in. While I’m not where I want to be, I’ve been able to load up the bar pretty good lately. A couple of buddies at the gym were doing their deadlifts and pulling some decent weight. It lit a fire under me.

So a few days later, I did the same. I warmed up, loaded the bar and did my lifts. I pulled a moderately heavy weight just fine. Then loaded it with what was, to that point, the heaviest deadlift I’d ever done, 350 pounds. It popped right up. So I added 20 more pounds, just to see if I could. Sure enough, after an initial grind, I stood with the bar in my hands, the rep complete. It wasn’t too far from twice my body weight. I’m not going to brag on a 370-pound deadlift – it’s OK, but not great. But it’s a PR for me. And a win during a year that’s been mostly devoid of them. It gave me a pick-me-up just as the fall race season ramps up.

The truth is I love this stuff. I bitch about running miles when it’s blazing hot, or walking funny after leg day. I cuss myself in the middle of some epic Type 2 fun. But I’m not getting any younger. Time is slipping away. I can still do hard things, and maybe get a little better, and it’s best to make hay when the sun’s still shining. Maybe by the end of the year I’ll have a few more in the win column. I’ll just have to keep grinding and see.