Sweet trails at Loveland Pass, Colo., on an iffy weather day in 2015.

I got pretty stoked at last weekend’s forecast. It called for snow, which we rarely get anymore here in northeast Oklahoma, so my plan was to get my weekend chores out of the way, head to the trails and see what the woods looked like with a fresh blanket of snow on them.

I woke up to the snow ending, and just barely enough to pockmark the grass with dots of white. A dusting, and not the three inches I’d been expecting. It seems like the last few winters have merely been an extended fall that hurry themselves into spring earlier than I’d like. Part of that whole “hottest decade ever recorded” thing, I guess.

Anyway, I bailed on the hike and watched football instead.

But part of me wonders if I missed out, even without the scenery I expected. After all, some of the most memorable hikes I’ve done have come at times when the weather seemed to be saying “no.”

A few that come to mind…

In the summer of 2015, forecasts called for relentless morning and afternoon storms in the Rockies. I’d already been chased off Longs Peak earlier that week by bad weather and route conditions. But I desperately wanted some alpine time, so despite the ugly prediction I headed up to Loveland Pass to see what I could get.

It wasn’t a huge hike, nor was Cupid a prestigious summit. But the summit views and the way the clouds weaved around and over the mountaintops was so worth it. 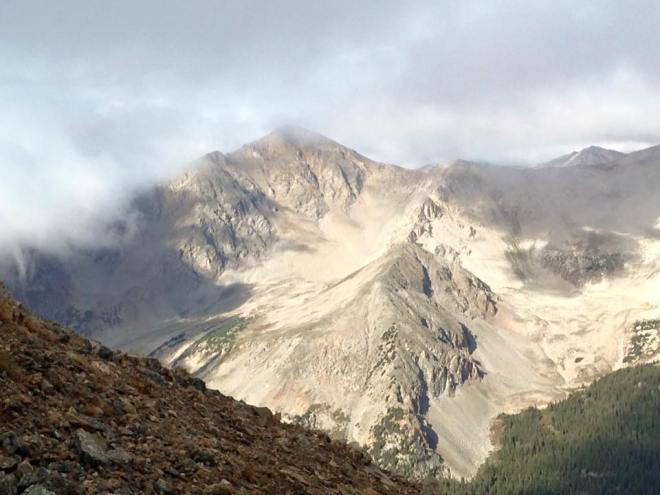 Huron Peak emerging from the clouds, as seen from the northwest ridge of Missouri Mountain in 2013.

Two years earlier, terrible rains were flooding the Front Range and northern Colorado when I was supposed to join a group for a climb of Capitol Peak. The trip was jettisoned, but here I was in Denver and having spent a bunch of time just driving there, I couldn’t let it go. I took a chance on the iffy forecast, headed to the Sawatch Mountains and car camped at the trailhead of Missouri Gulch Basin. The next morning, with things looking as dicey as ever, I started marching uphill toward Missouri Mountain.

The weather held off. I was treated to surreal scenery and solitude on what was probably the most memorable summit hike I’ve ever done. It wasn’t a particularly difficult mountain but doing it solo on a day like that made it special. I wouldn’t trade that day for anything.

Rewind three more years. One weekend I had some free time and decided to head to the Wichita Mountains of southwest Oklahoma. I unintentionally ignored the forecast, but when I got there, it was apparent it was going to be a stormy day. Having driven more than two hours already, I said, “to hell with it” and marched down the trail.

A break in the weather going up a ridge in the Wichita Mountains in 2010.

I didn’t get to my objective that day (too stormy), but I did see some amazing things and got to know the range in a way that most of us never get to see: Enveloped in a historic squall, wearing the weather’s colors in a manner that was almost mythic. I’ll never forget that day.

I’ve had a few friends tell me that when it comes to big hikes and climbing mountains that you just need to go, even if the forecast sucks. It might turn out accurate, and you may have to bail. But you also might catch a window that allows you to have a memorable adventure. If you bagged it prematurely, you never know what you may have missed.

So, I suppose when I get my heart set on some snowy scenery and it doesn’t pan out, maybe I should go hike anyway. Something else might await that makes it worthwhile.