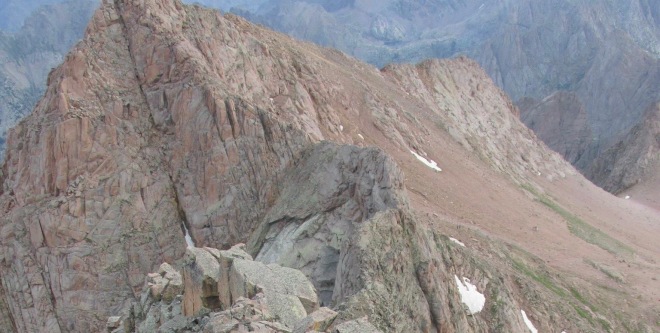 A cropped look at North Eolus, from the summit of Mount Eolus.

NOTE: This is the next in a series of revisiting some peaks from past trip reports, with an emphasis more on the route. Special thanks to Mike Zdero and Matt Carver for helping me out with some photos for this one; for some reason, I didn’t feel like taking many pics going up this mountain.

Of the four 14ers of Chicago Basin, North Eolus (14,039 feet) is probably something of an afterthought. It’s not an “officially ranked” 14er because it’s summit does not rise 300 feet or more from the saddle connecting it to its parent peak, Mount Eolus.

That said if you set out to climb it, there will be no doubt left in your mind that it’s a real mountain, complete with a few challenges and incredible summit views. North Eolus is usually done in tandem with Mount Eolus, and among the Chicago Basin 14ers, some might argue that it’s the easiest of the four to get. I can’t make the judgment – all I can say is I thoroughly enjoyed its comfortable, scenic summit perch. By itself, with Mount Eolus, or with the rest of the Chicago Basin 14ers, this is an unforgettable alpine wilderness experience.

Some of the information to follow is identical to that of Mount Eolus, so if you read my post on that one, you can skip ahead a bit. But if not, read on.

Getting to Chicago Basin is a bit of an obstacle. It’s remote, and there’s no quick way to get to its trailhead on foot. You basically have two choices: Hike in from Durango (that might take at least a couple of days) or get an open-air ticket on the Durango & Silverton Narrow Gauge Train, a tourist service that takes vacationers on a ride between the two towns and through the mountain scenery along the Animas River. Most people do the latter, a service provided by the train operator to backpackers. The train stops at a place called Needleton (there’s no town there, just a spot for the train to stop and let people off), and on the banks of the Animas River there is a pedestrian bridge that leads you to a trail. Your ticket price will include pickup and a return trip to Durango once your trip is over; be sure to book in advance. 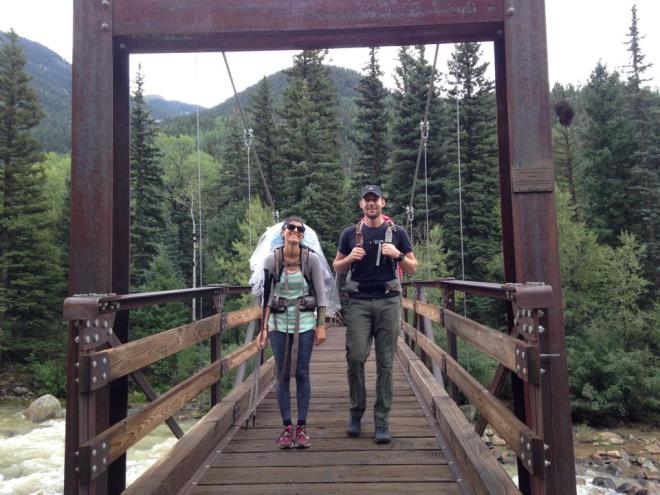 The bridge leading across the Animas River from Needleton.

From the bridge crossing, a good trail goes all the way to the Basin. It starts out flat, but soon you start gaining elevation quickly. About 5.5 miles in, you will see places where you can camp. Campsites are available up to 7 miles or so from the bridge crossing, right at the southern foot of Mount Eolus. Most people choose to camp after the hike in so they can get an early start – a wise thing in the summer, as afternoon storms are common here. 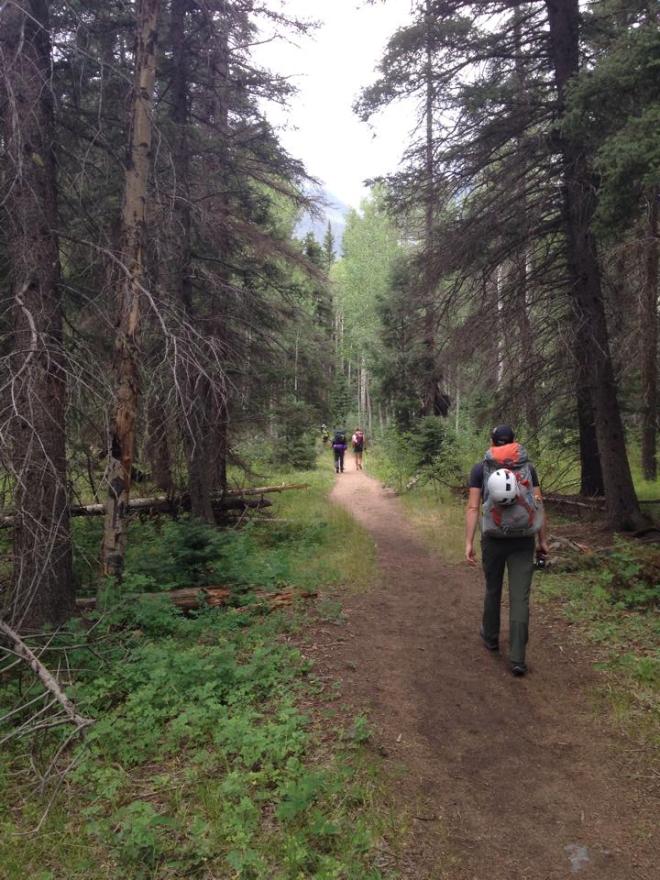 Easy hiking on the low part of the trail to Chicago Basin. 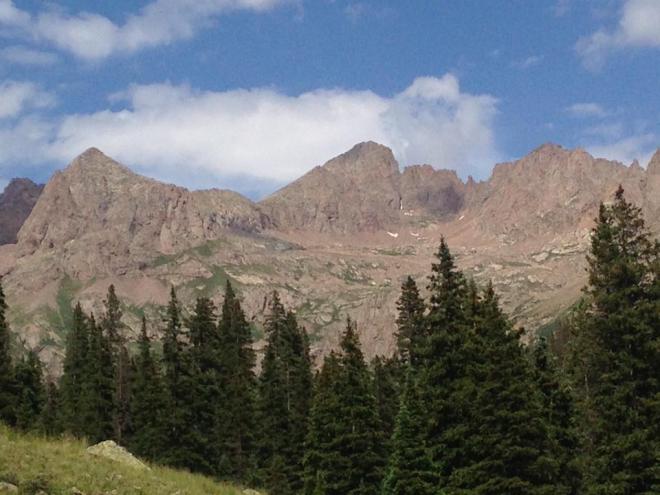 Impressive view of the Chicago Basin peaks from higher on the trail. 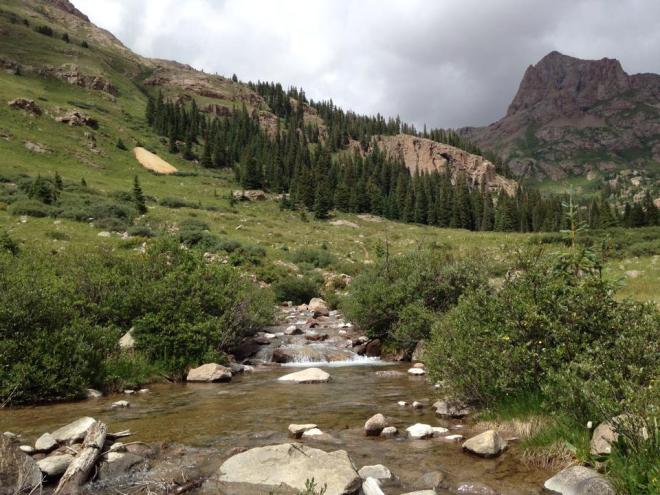 A great water source high on the trail to Chicago Basin. Several campsites are close by. This is about seven miles from the trailhead.

From there, follow a good trail along the river, then a series of switchbacks up the headwall – steep Class 1 and 2 hiking. It’s a real leg- and lung-buster, but nothing more. Higher up the headwall, you will cross rock slabs that are slippery when wet. This will lead you to a saddle between Mount Eolus (to your left) and North Eolus. 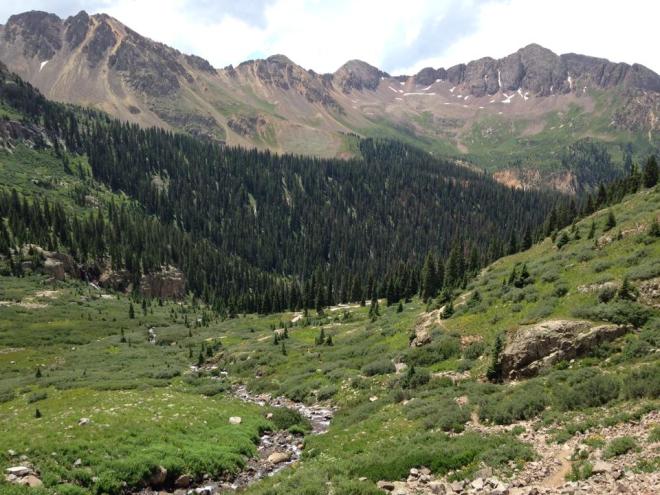 A view looking back at the route low on the headwall. 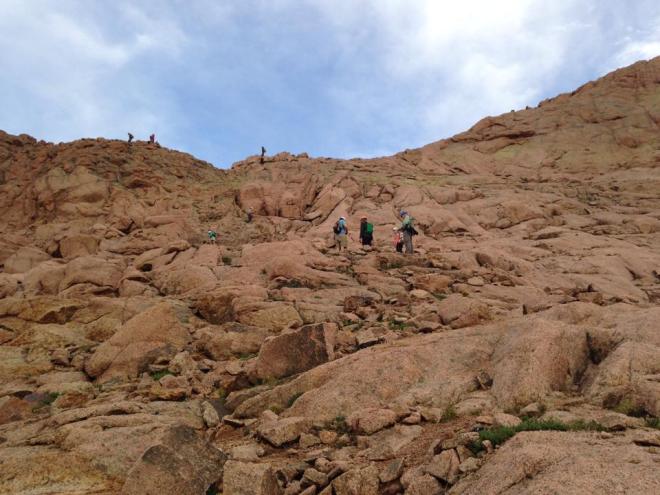 High on the headwall, looking up toward the saddle between Mount Eolus and North Eolus.

It’s about here when you’ll want to take a look at the skies and determine how the weather is going to hold out. Even though the climbing on North Eolus is straightforward, none of these peaks offer a fast retreat to treeline.

If it all looks good, you can proceed up North Eolus’ south ridge to the summit. At the saddle, turn right to gain North Eolus’ summit ridge. Even though North Eolus shares the same ridgeline as its taller neighbor, the rock couldn’t feel more different. Rather than a series of blocky ledges like you see on Mount Eolus, North Eolus is more a more slabby experience and not as steep. A Class 3 scramble on grippy, solid rock awaits, giving you quick access to the summit. There are no route-finding issues here, and much of the pitch is walkable. The two most difficult spots on the route are at the very beginning – an awkward scramble move to gain the ridge, and just short of the summit where the route steepens a tad. While there is a good amount of exposure to your left, it’s avoidable – certainly nothing like the airy ridge-direct route on Eolus. 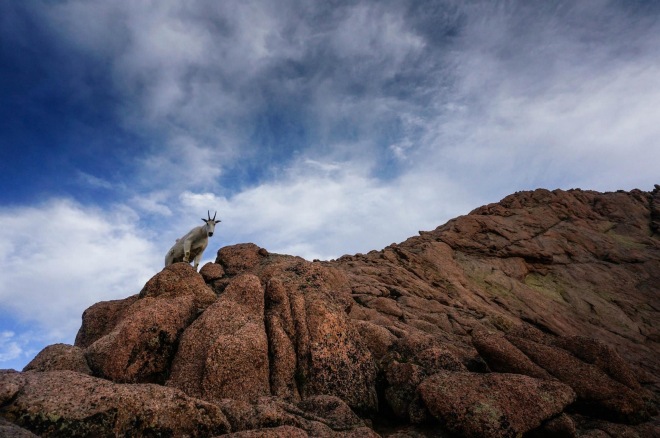 Looking up at the route on North Eolus, with a mountain goat looking down. The route scrambes over this craggy spot, then follows the ridgeline up. 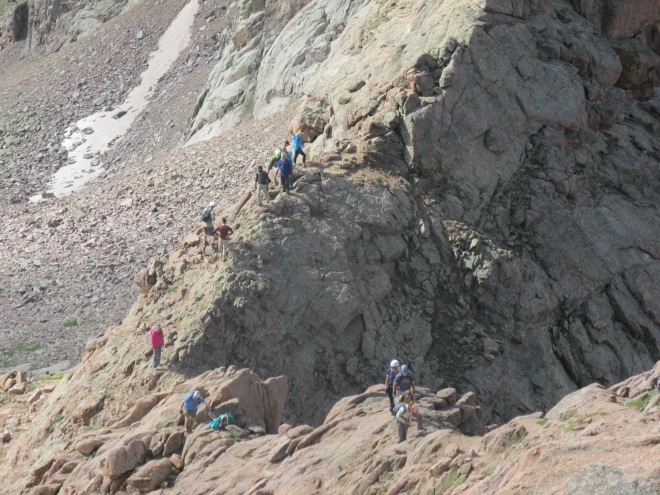 From above, looking down on hikers beginning to ascend North Eolus’ south ridge. 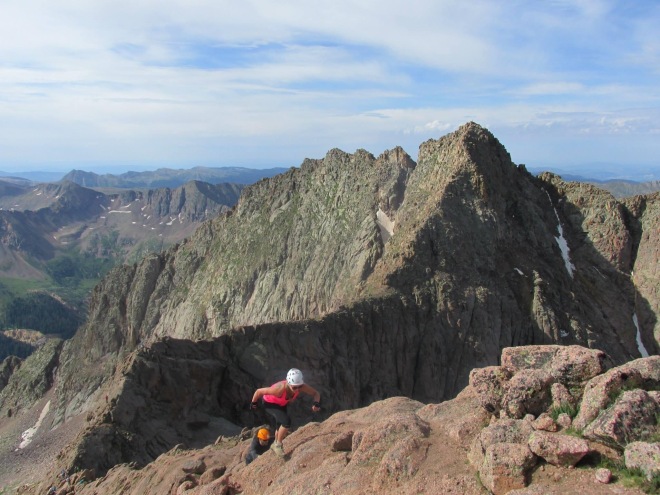 A climber nearing the summit of North Eolus. 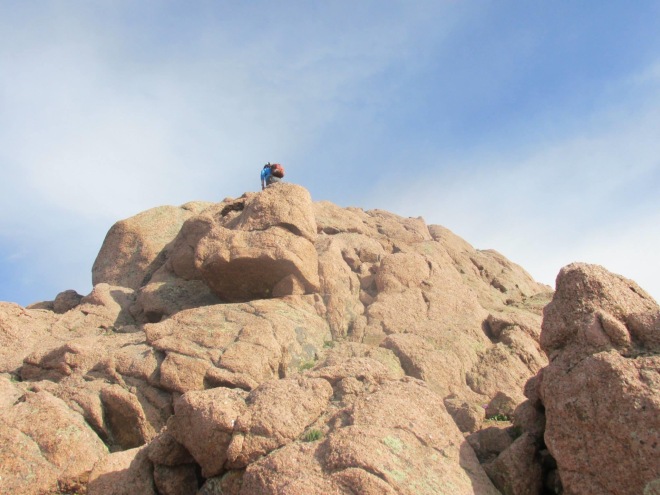 Looking up at North Eolus’ summit.

The reward is the magnificent view of Mount Eolus, in addition to Sunlight Peak and Windom Peak on the other side of the Basin. Equally impressive are the Weminuche 13ers, including Pigeon Peak, Turret Peak, and further in the distance, Vestal Peak and Arrow Peak. The panorama of the Weminuche’s alpine wilderness from the North Eolus summit is not to be missed. 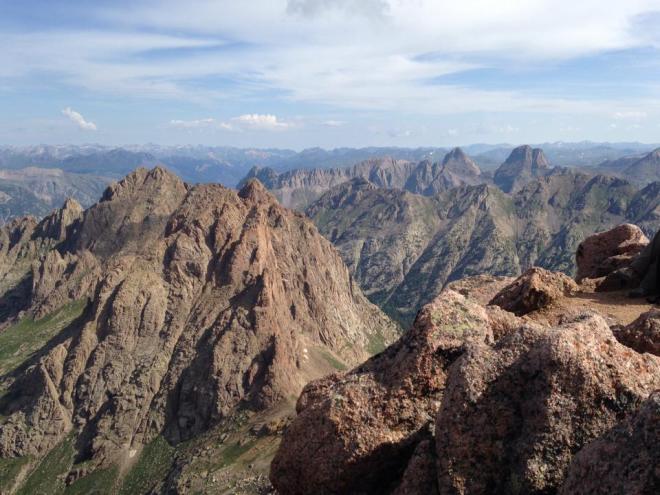 A magnificent view of the Weminuche Wilderness peaks.

From the campsite closest to the headwall, your elevation gain is about 3,000 feet. Route length is about 6 miles.

A couple things to note: Bring bug spray (the flies are relentless in the summer), and know that there is a sizable population of mountain goats that are accustomed to people and often hang out a camp and might follow you around.